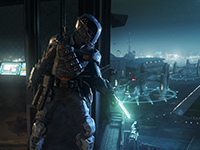 Of course all of this is just another huge push to get you to pre-order Call Of Duty: Black Ops 3 on Activision's end as there are still no solid details on the maps, modes or Specialists we will get to play in this "beta" as of yet. That or this really is a reminder to the rabid fans of the Call Of Duty franchise who have not been counting the seconds until they would be able to load up the latest version of the franchise's multiplayer and go to town killing everything in Black Ops 3. I am pretty sure that it is the prior but who knows. Gamers sometimes tend to have faulty memories and need that extra nudge even with titles like Call Of Duty: Black Ops 3.

Until we get those details out of Treyarch as to what we will be able to play with Black Ops 3's multiplayer, here is a nice trailer that will show us all something. It looks like a lot of footage of the modes, levels, and specialists that were playable at E3 so I have a feeling we are going to be getting an expanded version of that Black Ops 3 build to test out before the game officially launches on November 6th this year.

Are you excited for the Call Of Duty: Black Ops 3 multiplayer "beta" here? Are you a PS4 or Xbox One/PC fan whom will be getting access later? What do you think will be playable in this "beta" for Black Ops 3's multiplayer? Do you understand why I am placing beta in quotes? Let us and the world know what is on that mind down in the comments below and discuss. It's been stated that we will be getting more details for the Call Of Duty: Black Ops 3 multiplayer beta soon from Activision so be sure to keep checking in for all of that so you can tell if it will be worth your time or just if you should wait until November to give Black Ops 3 a go instead.