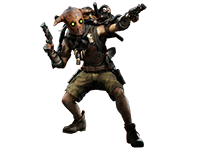 The hunt continues on as Evolve's second major DLC push brings us yet another Trapper to play with in the game. This would be part of the Hunting Season 2 DLC push that Turtle Rock Studios has been working on to keep fans playing Evolve as well as trying to draw in more fans for the game. If only they would have started with a character like Jack, or Jackal, from the start I might still be playing Evolve. Although Now that I see him in action here 2K Games may be seeing my money flying back at them for this next bit of DLC. A junkyard hunter who thinks he's a superhero? Count me in again Evolve.

Yes that is the base description for Jack here in Evolve but of course he is much more and available for those who have the Hunting Season 2 DLC already paid for. As of today he is available and you too can be shooting with his four different pistols in Evolve, using his repulser power that is akin to a "Force Push," and also using his orbital satellite to track, find, and harm the monsters in Evolve. Not too bad of a spread that he has here to bring to the hunting party. Like I said, I only wished that he would have been part of the first batch of characters and not have taken so long to make his way into Evolve. Looking sideways at you Turtle Rock Studios.

Also coming with Hunting Season 2 for Evolve is a nice spread of changes for the game as updates that a lot have been hounding 2K Games to force into action. That and a new Map. A new free map for Evolve with five different areas designed just for Arena Mode in Evolve. The name, and I love this, is the Murder Pits. Yes, the Murder Pits and here is a short breakdown of what each area will bring to Evolve outside of the murder of course.

Of course there are a lot more things coming between now and March of 2016 for Evolve's Hunting Season 2 but this is what we have added as of now. You can purchase and/or download any of the above as well as the other Assault Hunter announced a while back, Lennox, as of right now for the PS4, Xbox One, and PC. If Turtle Rock Studios can keep the DLC up to this level of snuff I may be playing a lot more Evolve than I have to date. Let's just hope that is the case with the other hunters and monsters we know have to be on their way to Evolve in future DLC releases.

It's that time again to let us know what you think about Evolve's new hunters and map. Do you still play Evolve and looking forward to add all of this to your experience? Have you given up on the game and want to see all of the DLC before you make the plunge again? Let us know down in the comments and discuss. We all know that there will be more hunters and monsters coming soon to Evolve via this DLC so be sure to keep checking in often here to make sure you see it as soon as 2K Games gives the okay to share to the world. You won't want to miss it at all.