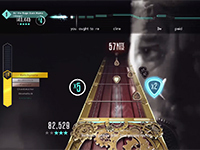 It looks like Guitar Hero Live is getting something that many have wondered would be included since it was first announced; vocals. It looks like FreeStyleGames didn't want to leave any Guitar Hero fans left out or Activision wanted to make sure it could truly compete with Guitar Hero Live's competitor in the gameplay options and not just the soundtrack. No matter the case here though it looks like vocal options are making the way back into Guitar Hero Live when it hits the PS3, PS4, Xbox 360, Xbox One, PC, and mobile devices on October 20th this year. Now we just wait and see if drums are making it back in here for Guitar Hero Live too.

From what is described in the following video for Guitar Hero Live it looks like we may have to level up our account during gameplay to be able to go head-to-head online. This could just be weird descriptions by one of the guys from FreeStyleGames but it is stated that you may need to level up to, say level ten, in Guitar Hero Live to be able to have the experience. Of course it is all mentioned in hypotheticals along the lines of guitar skin unlocks and Hero Powers for Guitar Hero Live so it may just be some misconception on my end. Maybe not though so it is worth mentioning as you'll hear it yourself in just a few seconds if you haven't jumped to the new Guitar Hero Live video already.

I won't hide the fact that I am at least a little interested in seeing how GHTV is going to work in Guitar Hero Live here as it keeps getting better and better descriptions with each update for the game. It sounds like Activision is going to insane lengths to make sure that we have so many options in the way of music to play in Guitar Hero Live and that the list will grow greatly each day. We have only seen a few of the same songs listed in the GHTV images and videos so far so it is hard to say but I love the fact that Guitar Hero Live may have an every growing playlist for us all. I just hope there isn't some kind of monthly premium we will have to pay to have unlimited access to it.