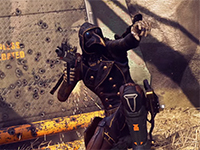 All good things have to come to an end and that is no different for Call Of Duty: Advanced Warfare's DLC packs. Especially since we are going to be getting the next huge title to the franchise here in a few months it would make sense that Activision would want to press on from this Sledgehammer Games title in preparation. Advanced Warfare has had a great run and now on August 4th the final bit of DLC for the game will hit the Xbox One. Most likely it will hit the PS4 and PC version about a month later as seems to be the case with all of the past Advanced Warfare DLC packs so all of you Call Of Duty can calm down and know when to expect the end of this run of Zombies to wind down.

The next pack, titled Reckoning, for Call Of Duty: Advanced Warfare will house four more exo grapple-enabled maps to kill each other on. These maps being Fracture, Overload, Quarantine, and Swarm. Of course each will have their own new map interactions and scorestreak bonuses as with all other Advanced Warfare DLC in the season pass but we'll all have to play to find out all of the dirty little details of each. We wouldn't want to spoil any fun as this will be all of the Call Of Duty we will have to enjoy until Black Ops 3 comes out. You won't be robbed of that fun on my account by any means now.

As with all of the other Advanced Warfare DLC we have a nice little trailer to gawk at and see these maps and gameplay segment in action right from Activision. They are all face paced and fun looking so you may have to slow down the video and watch it a few times o catch all of the little additions and changes here in the Advanced Warfare final DLC pack. The wonders of the internet and not having to only watch TV commercials to see new things. Such a great thing and you hopefully won't be let down with what Sledgehammer Games is putting into Call Of Duty: Advanced Warfare in the final hoorah as they most likely prep for their next dev cycle in the franchise.

There you have it. Your final Call Of Duty: Advanced Warfare DLC pack in all of its glory. What do you think? Will it be the strongest of all of the DLC packs or will you be getting it only for Zombies? How have you enjoyed all of the past DLC packs for Advanced Warfare? Do you think Sledgehammer Games has been doing a great job or are you just ready to move on? Let us know and discuss in the comments below. As this will be the last bit before the next Call Of Duty you may not be looking more for Advanced Warfare but we will have all of the updates for the franchise from Activision as we move forward and you won't want to miss that so stay tuned in here for more.