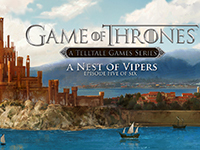 We are quickly coming to the end of Game Of Thrones from Telltale Games and it has been one hell of a ride. Only one more episode to go now as A Nest of Vipers, the fifth of the six episodes, hit the PS3, PS4, Xbox 360, Xbox One, and PC starting on July 21st. I am still hoping to see a few of these have HBO show tie ins but as of now it is all in the game. The last episode left me wanting and now we get to see if Game Of Thrones is going to fill that void or leave me wanting more. I guess we'll find out as I review Game Of Thrones: A Nest of Vipers just for you (yes you reader) and if I am going to be pining for the final episode of the season in due time. Not holding back anymore. Here's our review.

Last we left House Forrester things were not looking so great. Thus is the Game Of Thrones universe but all were kind of scattered and without much hope sans Asher. Nearly everyone in Kings Landing hates them. Their own lands are blood soaked with their kinsman's blood and Ramsay Bolton sits pretty in our hall. Asher helped take Meereen and should be heading home with fighter to help out the family but that is all still up in the air as we get into the events of Game Of Thrones: A Nest of Vipers. We'll have to wait and see where this goes and how things will pan out. The Forrester are the new Starks here.

So this worked in Telltale Games' other titles, I'm looking at you Tales From The Borderlands, but giving us options to take that are not really options don't play out as well in the world of Game Of Thrones. Maybe it is the path I have found myself going down here in my story but there were too many choices I made that didn't play out because it didn't fit the overall story. A big one being the option to stab one of the main antagonists for the Forresters in Game Of Thrones. Why give me the option if I can't follow through on it? There were other minor instances of this in this episode too but this one sticks out the most. Game Of Thrones has never dealt in that before and it doesn't fit. Like I said, that is more for other IPs.

Maybe it was just me, and the fact that this bit of story for Game Of Thrones was enthralling, but A Nest of Vipers really felt like the shortest episode to date. I started the episode and in what felt like less than an hour I was coming to the huge decision that we had to make in the story. It may have been a bit longer but it really didn't feel like it was as long as the other episodes so far in the season of Game Of Thrones. I even remember one chapter being no more than a scene or two that had very few options and story bits. I may be mistaken but as you'll read below you'll understand why the shortness made the hated list here.

Best story of Game Of Thrones by Telltale Games to date. Even the usual boring bits in Kings Landing had me pulled in and wanting to see what would happen next. It may have taken a bit of time in the first few episodes to get some traction but now Game Of Thrones has it and it will hopefully go into the next episode to try and force a season two out of HBO here. It had almost everything that makes even the TV show's episodes so amazing that if it wasn't for the controller and the visual effects in Game Of Thrones here I would swear that was what I was experiencing. Let's keep this ball rolling on and into future segments of the franchise. As long they are as long as the more boring episodes in literal time.

Now as far as gameplay for all of the episodes of Game Of Thrones we have had pretty much the same tired and true that we've had in all of the other blockbuster titles they've made. In A Nest of Vipers there was a great addition that I hope we get a whole lot more of which was a choose your own adventure combat segment that from what I heard could have been ended early by choosing weapons and missing actions. Even if that isn't true here for Game Of Thrones, as I never experienced it directly, this was a great mix into the basic QTEs and choices we have to make. I'm hoping that selecting the incorrect weapon to defend with would have truly made things a bit more difficult in this episode of Game Of Thrones.

Lastly, and this is huge for me, we finally got our MAJOR choice that needed to be made in Game Of Thrones that could have completely alter the whole story line. I won't spoil this choice for you but just know that it really hits home and makes you have the feeling of consequence we've, or at least I've, been waiting for in Game Of Thrones here. I spent almost all of my time making the choice as it was so rough and led to a vastly different experience I thought I was going for. It paid off in the overall fun factor of A Nest of Vipers and I hope it will pay off for my play through when all is said and done. Please don't screw me for that choice Telltale Games.

Game Of Thrones — Episode 5: 'A Nest Of Vipers'