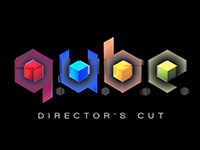 You take on the role of an astronaut who wakes up in a mysterious white cubic room, hence the name Q.U.B.E. I am guessing. All memory on who you are or how you got there have been lost but at least you have some cool gloves that look like you used to be a raver before. As you try to solve the mystery of what the fuck is going on more mysterious broadcasts come in to help you figure things out, confuse you, or just how to escape the Q.U.B.E. and save the entire planet at the same time. Sounds quite a bit like that little unknown film of the same name to me but what do I know? In any instance it is on us to figure things out and not to be told here…

It's odd when I get to start off a review with very little hate and Q.U.B.E. Director's Cut is another one of these reviews. To be honest there were only two major things that bugged me during my play through of Toxic Games' console version of the game. The big one had to be that the controls, while manageable, had a pretty steep curve to get past to make Q.U.B.E. Director's Cut playable for me. In fact I am still having a bit of issue as I go back and play the timed trials as while it does use the triggers to fire off commands, the norm of right being the "activate" and left being the "deactivate" triggers is swapped. Maybe this is because I am used to how many other games have been configured over the years but it takes a lot of getting used to and caused many puzzles to have to be restarted due to incorrect commands being fired off.

The only other item on my hat list for Q.U.B.E. Director's Cut here is that while it does have a bunch of timed trials to work through the core game in itself is very short. I'm talking I beat it with a time of less than four hours and that is with all the restarts and issues I had with Q.U.B.E.'s control issues I mentioned above. Maybe it is because the story had very little to expand upon but all of the timed trials could have been mixed into the core story of the game and give us a longer experience with Q.U.B.E. Director's Cut. Then again I don't know what kind of time table Grip Games had the developer under to get the game out to consoles and if it would have worked in the end. I just like my games with story to be a bit longer and Q.U.B.E. Director's Cut was not that.

Oh the brain teasers and puzzles of Q.U.B.E. How I love thee. Not since Portal have I had a really amazing puzzle style game with a fun narrative and we definitely had it here. You can see the time and effort that the small team put into the level design here as well as all of the puzzles. Some of which had a real feeling of accomplishment when solved to move on as they were tricky. My brain was stimulated and I had a blast figuring them all out; just as a video game should be. If nothing more Q.U.B.E. Director's Cut gets top marks just for making the core gameplay and puzzle solving as amazing as it was even if it was a short game. There are not many out there like Q.U.B.E. in today's market and there really needs to be.

Also, and I don't know if this is supposed to be the case, but the level design also allowed for multiple solutions to the above mentioned puzzles of Q.U.B.E.. In fact I saw a few different ways for almost all of the puzzles which usually isn't the case for these kinds of games. The level design was done so well here that there was a sense of freedom in these isolated and claustrophobic areas in Q.U.B.E. This made the whole experience feel like I wasn't playing just a sequence of maps to lead to the next; even if that wasn't the end goal of the game. Either that or there were a few missed "bugs" left in that I was able to exploit but either way it led me to the same conclusion and I loved it.

Lastly, and this is also on the level design, the team did an amazing job using the most basic of art assets and level geometry for Q.U.B.E. to make it still feel unique and on par with some AAA titles out there while using a small team. I know this goes all the way back to the original released version of Q.U.B.E. here but for some extra reason it spoke to me while playing on the next gen consoles. We usually get lost in the want for photo-realism in our games today that we miss how even the basic building block, pun intended, can still make a game feel unique and beautiful as Q.U.B.E. Director's Cut here did. It was almost literally the same blocks over and over.

If you even remotely liked Portal or Portal 2 then you are going to want to give Q.U.B.E. Director's Cut a play again on the consoles here. Yes it is short but it is so sweet that you can kind of overlook that issue. Hells, it even has a bunch of timed trials to keep you going a bit longer after the core game is over that you can use that to justify the cost and base time you will put into it. Even if you are not huge into puzzle type games Q.U.B.E. Director's Cut will most likely also tickle your fancy as it isn't the normal, traditional kind of puzzle game. I say give it a shot and you most likely won't regret that at all. Have I steered you wrong yet?

Q.U.B.E: Directors Cut was developed by Toxic Games and published by Grip Games for the PS3 and PS4 on July 21st 2015, the Xbox One on July 24th, and the Wii U in August 2015. A PS4 copy of the game was provided by the publisher for reviewing purposes.