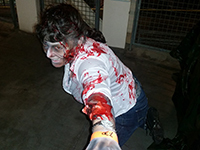 Another SDCC down and another fun run of The Walking Dead Escape to show us all how a survival horror kind of game could be like in the real world. If this is your first time reading about The Walking Dead Escape this would be the zombie obstacle course that has been set up out in San Diego's Petco Park for the fourth year running. Pun intended. The quick breakdown, if you don't want to read our original write up, is that you get grouped together with a small group of other "Runners" and then set loose to get from one end of a set up obstacle course to the other all while a group of other paid participants dressed as the "Walkers" try to corner you and end your life. No touching is allowed but it is none the less terrifying to try and not get cornered.

Right out the gate for The Walking Dead Escape we had a nice little intro that explained that a few things were going to be changed for this year's run. The big one being that The Walking Dead Escape was going to be more of a 4D kind of experience and not a balls-to-the-wall obstacle course. I am thinking either there were some legal issues in the past that needed to be fixed for The Walking Dead Escape and injuries but that is mainly based on the vast difference from the first year to where we are now. Either way after the basics we were greeted by Aaron from the show and comics and brought in. This is where the next big difference was spotted by me.

You might not be able to tell by the following images but in the actual run of The Walking Dead Escape it looked like there were even fewer people paying to be Walkers this year. In fact, the whole first big section was pretty devoid of them and there only felt like there were clusters due to the tight corners we all had to squeeze into to move up Petco Park. Unlike before I was able to almost leisurely stroll through most of The Walking Dead Escape this year because there were so few or so very spread out Walkers that as long as they stayed in character I could walk right past. The only differences were the premium, at least I think they were premium, Walkers who were allowed to break some of the basic rules.

Speak on actors, I did mention this was more of a 4D experience than a run; this is where the changes for this year's event truly changed. You'll see in the video that at a few predetermined sections of The Walking Dead Escape we all encountered story sections were the experience was further detailed and explained; at least as our own characters would see it if we were playing The Walking Dead Escape as a game instead of an experience. This is of course where I have a few more mixed feeling on the whole thing.

I will not knock the actors of The Walking Dead Escape at all as they did what they could to make the experience fun, interactive, and feel completely fresh. Sadly due to the timing and environments they felt more like pace keepers or something to make the whole run feel like it was longer than it actually was. I missed a few things due to the actors having to move us all along. Also some of the story bits ate up a lot more time than any running, jumping, or diving. It was almost like The Walker Stalker crew had a smaller budget and even more limited space at Petco and had to force this to make everyone feel like they were getting what they paid for. They just also happened to luck out that the performances, when people got to see them, made you forget that The Walking Dead Escape was originally an obstacle run.

As you will hear in the below video the last four or five minutes can barely be heard as The Walking Dead Escape let out right next to said party. You can hear it in full swing over what Negan and the crew is saying. Last year the party was in full swing as well but the location chosen for the ending of The Walking Dead Escape was placed in such a way so that no one could hear it until we all exited the final location. In fact I witnessed multiple people walking down the stairs to the party because they though the whole escape was over before it was as there was no indication and many couldn't hear the actors still talking. I know I'd have been upset if I missed out because the end of the course was poorly laid out and I had no clue where to go.

When all is said and done though I still really enjoyed myself during The Walking Dead Escape this year as I have in year's past. I still long for the day that we get back to how it was the very first year that Skybound was able to put it on as it is the closest a lot of us will ever get to playing a Survival Horror in real life. Then again this was The Walker Stalker Con's first year running The Walking Dead Escape so maybe this was a bit more of a learning experience for them. Here's hoping that the next one will be even bigger and that they will be bringing The Walking Dead Escape on another tour around the states as they have also done in the past. We'll have to see. Until then enjoy my run through and all the images we were able to grab.