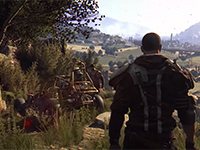 It is hard to think that Dying Light launched just about a half a year ago and we are still getting solid updates and DLC for the game. Techland has made sure to do way more than just the basics we have become accustomed to in our video games to date. They could have just said, "We fulfilled our Season Pass DLC and now you are on your own" but they keep pumping out more Dying Light DLC on a regular basis. That is of course why Dying Light hasn't fallen out of view in the community and has had longer staying power than most other zombie games out there.

To go along with this it looks like Techland is having a small celebration over keeping Dying Light alive, pun intended, for so long as we have a nice little trailer showing off what is available for Dying Light right now as part of the Season Pass as well as Free for all. Yes, there is a good chunk of free DLC for Dying Light that even I missed out on and want to spin the disc back up to experience. There is just so much that has been added over the last 180 days it is pretty damn crazy.

If you are curious as to what you may have missed in way of Dying Light DLC, here's a nice new video from Techland showing it all off. Not only that but it looks like we are getting even more for Dying Light moving forward and I'll leave the surprise for you to see at the end of the video. Have a good watch and see what I am talking about.

If my eyes are not deceiving it looks like we are going to be getting vehicles in Dying Light coming soon. This is of course all based on the fact that the ending of the video here has two characters getting ready to hop into a dune buggy and nothing official from Warner Bros. or Techland but it seems logical. Either that or we are getting a third person mode for Dying Light and this was an odd way of teasing it. Gods that would be a great addition to the game; at least for me. I love the FPS view but I could so get down with being able to toggle back and forth to see all those Dying Light character skins on my character.

Those of course are my thoughts but what are yours? What would you like to see added to Dying Light here? Have you had a chance to experience everything that was shown in the above video yet? How about getting vehicles added into the craziness that is already Dying Light? Let's discuss down in the comments. This of course means that we have a whole lot more to look forward to for Dying Light so keep checking in here as we get more released from Warner Bros. on all of the fun DLC in the game.