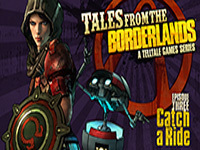 It is a long cycle for new episodes of Tales From The Borderlands to be released but we've had the third episode of the series released and I've finally had the time to sit down and give the extra story bit a play through. I mean the second episode of Tales From The Borderlands landed in March and this one landed near the end of June. At least there wasn't a delay between all of the platforms here and everyone who has a PS3, PS4, Xbox 360, Xbox One, or Gaming PC were able to play through the next bit. At least if they deemed it worth their time and money. In the instance of that last sentence, that is what I am here for as here we go with our review for Tales From The Borderlands episode three Catch A Ride.

Tales From The Borderlands — Catch A Ride obviously picks up with our dynamic duo at the end of the last episode's events. Makes perfect sense. The pair make their way to a bit of presumed safety only to find out that they are in deeper shit as the 'Queenpin' Vallory and her goons finally catch up to Rhys and Fiona. As usual things go down and we find out a bit more on what this whole Gortys Project thing is. Not to mention the ending of a few characters' story here in Tales From The Borderlands as well as a few stories expanded upon in the proper Gearbox Software universe already established. There are car chases and gun fights galore all ending in a spectacular scene that leave you in even deeper shit than you could imagine the characters being in.

One thing that I thought has always been under used in Tales From The Borderlands so far has been Rhys' electronic eye. It can do a bunch of things and has been useful in story situation before but that has been about it. It looks like Telltale Games wanted to make a mends for that and gave us a few large sections where this could be used. Sadly though it did nothing but give you a few silly explanations for plants and the environment doing nothing for the overall gameplay but slow it down. I thought that there might be some cool hidden thing during these sections to uncover but in this episode I don't think there was a thing. I could have easily pressed on to the things I love about Tales From The Borderlands in this episode but I lost a good chunk of time looking at stuff that had nothing to truly add.

On top of that this episode of Tales From The Borderlands felt insanely linear during my play through. There wasn't much exploring to be done and it didn't seem like many of the choices presented had a variety of outcomes. My choices didn't seem to fully mater to me outside of one that completely rids a character from Tales From The Borderlands altogether. Although I am pretty sure that no mater my choice that was going to happen in the narrative I was just able to make it happen by my hands and not that of the NPCs. Still not sure how that will affect my characters moving forward as it was unavoidable but who know what future episodes of Tales From The Borderlands could hold. I just hope we get back to feeling less linear and have more choices.

If there is one thing about Tales From The Borderlands that has captured me from the start it has to be the humor that Gearbox Software has in the universe and how it has been used in each episode. It could not be better hit on the head here in Catch A Ride. Even down to the point where you are asked to make a quick choice via QTE and no matter what you get the same result. The big joke there being that it is a choice that anyone with common sense, on the NPC side of the event, would be able to compensate for and they do. Then they make fun of you for even trying. I think this has to have been the first time I literally laughed out loud while playing Tales From The Borderlands by myself. That is a feat in itself and Telltale Games was able to pull it off.

Working from that, the overall story in this episode not only had the perfect humor but a great bit of character development for both Tales From The Borderlands and Borderlands proper. All perfectly mixed throughout to make sure we still were a bit grounded while laughing and enjoying things. It also expanded, as it was supposed to, quite a bit on other characters in the universe that were not made only for Tales From The Borderlands. This is one of the things that the game was supposed to do and it hasn't been overly present, at least to me, until Catch A Ride. I'm not sure if this was the plan all along but it has paid off well for this gamer here. Major kudos point here.

Lastly, and this is something that captured me in the first episode of Tales From The Borderlands, the driving/race scenes were brought back in this episode. Not only was it brought back but it was brought back in a way that made me feel a level of intensity as well as fear of losing characters or making them hate me after spending so much time making the "right choices." Not much of an exaggeration when I say it had a very Mad Max: Fury Road feel to it all while being placed in the outlandish world of Borderlands. I really hope we get more of these as we move into the future episodes for Tales From The Borderlands as they seem to be the best parts of the game; at least to me and it makes the whole thing worth my time and money.

I have yet to be let down by an episode of Tales From The Borderlands so my original opinion still stands. It would be nice if there wasn't so much of a gap between each episode but that is out of a want to keep playing when the episode ends. I would love to have the whole season now but as Tales From The Borderlands — Catch A Ride I can't seem to wait until Telltale Games gets to the end and gives us the whole season in one sitting. Each has been completely worth it and as before I fully recommend picking up each episode on their own instead of waiting for the whole season. Of course the season pass is the way to go but none have made me not want to keep playing and Tales From The Borderlands — Catch A Ride is no different. You should already be playing through the episode now.

Tales From The Borderlands — Episode 3, 'Catch A Ride' Trailer