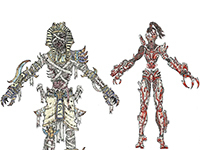 It's only been about a month since we had our fist look at a new character for Drawn To Death so it seems about right for us to get another. How about two more? Well that is what we have eyes on here as the Bartlet Jones Supernatural Detective Agency has released the high concepts for two more possible character for Drawn To Death. One tentatively named King Tut who employs ancient Egyptian style weapons and the other being tentatively named Sci-Fi Ninja. That character's abilities and weapons in Drawn To Death should be kind of self explanetory for the most layperson out there. If not, we'll have the breakdown of the current high concept for these possible Drawn To Death characters shortly.

For the un-initiated in design a high concept is pretty much the most basic ideas for a game to build off. As explained on the Drawn To Death forum board for these, and mainly in general, this is to give the whole team a starting point to work with and then flesh out everything in a way that makes sense for the game, or the game in general if you are not talking high concepts for characters. In the Drawn To Death instance though we are talking characters so it is more or less the idea to present so the artists, programmers, and designers can think about making it all work in Drawn To Death when all is said and done. So you can also note that these may not make it into the final game but it is something in the chamber at Bartlet Jones.

Here's the way it is all explained over on the Drawn To Death forums.

Curious how we go about designing characters for the game? It usually starts with an idea and/or a discussion among members of the team and then gets turned into a 1-3 pager explaining the high concept of the character. From here we meet with the team, assess the pros/cons (creative pros/cons as well as production pros/cons) of the character and then decide if we want to move forward with it. If we do, then the character is broken down in pretty crazy detail before a programmer begins work (so we can try to catch all the edge cases and possible problems before any real production work begins). Now that we have that out of the way, here is a break down of each of these new possible Drawn To Death characters right from their high concepts.

Press FIRE. Tut will go into a ball like pose for a moment (1 second or so) then automatically explode outward in a 360 ring of scarab beetles that damage all in the ring. The beetles then come back to center of ring and reform Tut.

IF Player is pressing MELEE (or some other button if Melee is too easy to hit by accident) while pressing FIRE the shape of the Scarab explosion is forward facing only, doing more damage to enemies who are in the cone in front of Tut. Just like the 360 ring, after the explosion the beetles come back and reform Tut.

NOTE: Players on the receiving end of this attack should be able to jump over the collision of it when the beetles fly out.

Press FIRE and Tut will launch a rapid fire stream of scarab beetles (or some Mummy inspired projectile) out of his mouth or hand or body or from some sort of cool ancient Egypt looking gun. One press of FIRE starts shooting the fixed number stream of beetles – you don’t have to hold down FIRE or keep pressing it. Every time one of the beetles/projectiles hits an enemy the enemy head expands and slight damage is done. If X% of the beetles from a single FIRE/SPECIAL hit the enemy then the enemy head will expand enough that the enemy head will pop (sending flying beetles and blood into the air) and the enemy will die.

NOTE: May be cool to expand the body and pop the whole body (vs. just popping the head) but will that create collision issues w/environment?

Press and release L1 and Tut instantly teleports X feet ahead of him, moving directly towards the point his cursor is pointing at. The teleport distance is not far; think of the distance between the crack/sex room and the building with the anti aircraft gun on the roof in Alientown. Tut keeps the momentum of the move he was doing when he hit L1. He also retains whatever action he was doing when he teleported so the Player can hold a charge or continue the action he started when he initiated the teleport. Player can teleport left, right, back as well for a predetermined distance, so it serves as an evade. If Player hits an object he will automatically come out of the teleport (and either go into a fall state or Player a stagger/stunned state for a brief moment).

If Player presses and HOLDS L1 for a moment there is some effect/animation cue to let the Player know the HOLD/CHARGE has taken effect. After this if Player releases L1 Tut will teleport back to the last position he was in before the teleport. If the Player has not teleported yet in the current life then a sound cue will play and a message will appear saying something like, ‘Teleport Reversal Not Yet Possible’.

If Tut teleports THRU an enemy it staggers/stuns the enemy for 1ish seconds of a full body hit/stun animation.

Tut has two melees: a basic melee (like all the characters) and a CHARGE UP melee where if the Player presses and holds MELEE (or some other button) for 23 seconds he will charge up and release a spirit looking ancient Egyptian themed demon out of his body. The demon flies up and out of Tut and slams forward, down into any enemy in front of Tut (I assume we may need some magnetism with this attack).

Very reminiscent of the fast swipe Katana we had in the game a while back. Player activates weapon and can use it for X seconds before it is automatically put away. During this active time hitting FIRE cause the Player to do a fast, fluid 5 hit combo*. If Player HOLDS FIRE on the 4th hit the blade CHARGES UP. If Player holds the charge for 12 seconds the blade glows bright and when Player releases FIRE the charge attack is a devastating forward thrust that not only does a good amount of damage but also takes the damage done and converts it into health that flows into the body of the Sci Fi Ninja.

*The idea would be we don’t worry about hit reactions on the victim when taking damage from the fast swipes of this weapon. We just toss off numbers and blood and only do a hit reaction (along with blood and numbers) on hit #5 or charge up hit #5.

Press FIRE and a ring appears around Player with electricity hitting all enemies in the ring, doing X points of damage every second or so. So it’s like Punk’s Brain Buster but it’s Damage Over Time vs. 1 kill if you keep enemy in the ring long enough.

NOTE: Seems like this needs a touch more to make it a bit unique. When you dash it does more damage, maybe? The more you charge it the bigger the radius but the weaker the attack, so there are 3 radius and thus 3 damage states? Or am I over complicating this?

Missile launchers either transform out of the ninja’s suit or Ninja pulls out a launcher. When Player hits fire, a timer starts and for X seconds Player can rapid fire as many missiles as he can get off. So it’s like the laser rifle stage one where you are pounding on the FIRE button but instead of laser beams, missiles are flying out and exploding with Area Of Effect damage when they hit.

An offensive and/or defensive move where the Player hits L1 and flings (or lobs – tbd) a teleport mine. This mine can go a very far distance (i.e. almost all the way across Alien Town). The instant the mine leaves the Player’s hand the Player can hit L1 and there is a brief tell animation and then the Player vanishes from where he was and immediately appears where the sticky mine is. The mine could be in mid flight or have already landed and the Player can teleport to it either way. When Player teleports he takes on the momentum of the mine, so if are standing still and you toss the mine thru the air and press L1 – as the mine is still moving – the Player will teleport to the mine’s location and suddenly be racing forward thru the air, just like the minewas.

Nav Attack:When the Player teleports to the mine he can hit FIRE (or hit L1 again – TBD) and he will teleport into the area doing a 360 attack with his laser sword attack.

Misc: This character should have stylish evades (ground and air) that cover a very big distance.

Personally I am digging both of these new character ideas for Drawn To Death even though it seems odd to give them both a teleport style Navigational Move special. I can see them working thematically as well as gameplay wise, more for the Sci-Fi Ninja, but it would make a bit more sense for King Tut to have kind of burrowing navigation move instead. I don't think any of the other characters in Drawn To Death completely have that as of yet and that would make for one interesting look in the game where the paper rises and bubbles as the 'tell' to keep in line with all the other characters in Drawn To Death having a specific way to note they are about to move. Then again I am not one of the great minds over at Bartlet Jones so they will most likely blow my idea away in the final build of Drawn To Death.

Of course these are all released out there to not only show us how Drawn To Death is coming along but to get feedback as they have been pretty open about all of this so far. Feel free to leave your own thoughts and comments here or you can head on over to the Drawn To Death forums to let the team know directly. I am sure they will appreciate that and in turn give us more for the game as it is in the works. We'll try to have it all here as well so be sure to keep checking back in for more on Drawn To Death.