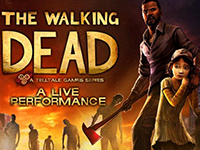 As if there wasn't going to be a shortage on The Walking Dead at SDCC this year it looks like Telltale Games' video game is going to get the liver performance treatment and you can watch it right here. Granted you can't watch it until Saturday (7/11) at 8:00pm PST but if you can't make it out to San Diego to see it and what Skybound has to offer us all. I have a feeling that this will be a lot like the same event that was held for The Last Of Us only with the The Walking Dead being the story and those character/actors doing all of the work. It is its own thing after all and not something that is being directly lifted. The Walking Dead wouldn't allow for that.

The Walking Dead Live Performance is all part of the Walker Stalker Fan Fest that is also going on during SDCC so if you happen to be in town for it you can attend it in person if you want to buy tickets for the con within the con out here. There will be a lot more than just this event for The Walking Dead for this fan fest but this alone should be enough to warrant a purchase to walk among the walkers. Like I said, there will be a lot of The Walking Dead out here and this is only a small fraction to partake of. Even if Robert Kirkman isn't going to be out there to help promote all things The Walking Dead.

For those who want more for The Walking Dead Live Performance there isn't much more to go on in terms of exact scenes. Here is a list of actors who will be on stage so we can try to figure out what we will see from Telltale Games' The Walking Dead when it goes live. Here's that list for you.

I think it is pretty safe to assume the usual heartbreaking and tear-jerking scenes for The Walking Dead will be making a show but what do you think? Will we have a whole lot of salt-lick killing going on and snack-pack handing out on stage? What scene would you like to see live from the actors? How about the adult actors playing really young characters on stage? Let's talk down in the comments and if you are reading this before The Walking Dead goes live you might want to just leave this page open so you are on the ball when it happens. We will send out reminders too. You don't want to miss anything for The Walking Dead.