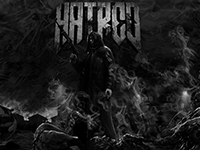 If there has been one title recently that has made a huge splash in a short amount of time it was Hatred. This is the twin-stick shooter title from Destructive Creations that was denied on Steam and then allowed back after much outcry. Mainly all of the negative press being aimed toward the ultra-violence that is portrayed in this AO title only on PC that has garnered its claim to fame but we had a chance to give it a good solid play through and we have our own thoughts on Hatred. Without gilding the lily any longer or pissing off the game's protagonist much more, here is our review for Hatred.

The world sucks and is bleak for our main protagonist that we control in Hatred. He has had enough of its bullshit and wants to take it out with a purpose. He also happens to be one of those crazed gun-toting types that has given a finger to gun safety and has decided to go on a personal genocidal crusade to alleviate his Hatred. Sadly for him most of the world isn't okay with crazed individuals who want to go willy nilly shooting everyone so he has road blocks at each turn. Why won't the police, military, mafia, and normal people let him set off a nuclear bomb in Hatred? Really? That is only his end goal.

Given the title here I think we are going to start off with a bit of love for Hatred here and what Destructive Creations set out to do. To me that was repackaging a lot of the hyper-violence that we have been complacent with in other games and slap us in the face like a flaccid horse cock in the process. Others have titled Hatred to be nothing more than a murder simulator and they wouldn't be too far off in general. Just because there is no comedic twist or truly heroic reason behind it doesn't change the fact that in most games we are just killing to gain points. Hatred just makes that the core gameplay and I see it more as a social commentary of things even if that wasn't the end goal of the game.

Sadly though, this is where the love for Hatred ends as it will take more than a clever gimmick and a bit of hyper-violence to make a great game. I was really hoping for more from Hatred to talk about here but this is not the case.

To start things off I have to go with the basic controls for Hatred. I tried playing with a keyboard and mouse, an Xbox controller, and finally a PS4 controller to try and make moving and killing in Hatred something fluid. No matter what I tried things never became easier and the controls just felt broken or poorly implemented. To give a good case and point in the tutorial, yes the tutorial, it took me swapping all of the controls around to just be able to leave as the running and jumping never married correctly in Hatred. In fact, it had me quickly finding out that using vehicles was the best option to get around without dying in a matter of minutes in Hatred.

Don't think that this solved the issue as the vehicles were not always available in Hatred but their controls always seemed to be designed to make me feel like I was a drunken Asian female stereotype behind the wheel instead of the genocidal machine the protagonist of Hatred should have been. Once I was moving in a straight or straight-ish line it became bearable but just enough to keep giving Hatred a solid play. Two different controls schemes that felt like they were just thrown in is not the way to help sell the idea that was being crafted here in Hatred. All it did was raise my own anger levels and nothing more.

Now to the actual killing and murder sprees in Hatred. This too, the main thing pissing everyone off, felt like it was lackluster and just jury-rigged together in the game. The sights of the guns never seemed to be spot on and then the close combat was just a joke as it would usual lead to the enemies with unlimited ammo killing me because I was out and trying to beat them down and score a finishing move on them. Those would be the crazy cool up-close kills that were shown in the Hatred trailers that pissed everyone off but I hardly ever saw during my gameplay. This was both because of the poor hit box set up or the fact that "The Crusader" always went with a gunshot kill from afar and not a close up murdery goodness one.

Lastly, and this is more of a nitpick for story sake, but the enemies ALWAYS knew where I was hiding in Hatred. Even when I was running away to take out easy targets to regain health and ammo the AI always came flying right in even though I gave no indication at all. Again, this seems like it was lazy AI implementation on Destructive Creations' side of things just to get their crazy game out there. I'm not asking for the NPCs of Hatred to completely ignore me when I am causing hell but when I am just walking through a location where NO ONE is and not making a sound I don't find it fun to be swarmed by enemies because my gun reloaded or I gained a bit of health.

At the end of the day is Hatred a good game? Gameplay-wise and control-wise not at all in my book. I had my own level of hatred growing while trying to get through the game proper and last I checked that wasn't the end goal for Hatred. It did do something on the sly that I absolutely loved even though most missed the point or my perceived point; that being along the lines of video game violence and how no one would have batted an eye at Hatred had you been killing zombies or Nazis. Force people to kill innocents and then they see the violence even if they don't see it in all of the other video games devoured by the masses.

Personally I would say save your money on Hatred but watch any and all of the gameplay videos out there for the game. Destructive Creations proved a good point in the industry in my opinion with Hatred and I only wish they would have implemented better gameplay to go hand in hand. Maybe in a Hatred 2 type game we can see the same ideas brought to light and implemented in a way that makes people have fun and think about what they are actually doing; not to mention how their ignorance can add to the things that lead people down the path of Hatred.

Hatred was developed and published by Destructive Creations for the PC on June 1st 2015. A PC copy of the game was provided by the publisher for reviewing purposes.