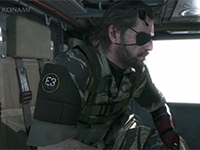 Not too surprising was the fact that Metal Gear Solid V: The Phantom Pain was one of the big titles that Konami had on the show floor for many to see at E3. What was a bit surprising, especially given all of the Kojima Productions drama, was the fact that their main demo was out in the open for all to see at specific intervals during the show. I would have thought that they would have had The Phantom Pain behind closed doors to keep questions to a minimum as they have in the past but I guess with the September 1st release date coming they wanted as many players seeing why they should pick up The Phantom Pain for their PS3, PS4, Xbox 360, Xbox One, or PC.

Given the insanity of E3 I had to miss out on the show floor demo for Metal Gear Solid V: The Phantom Pain as many at home watching from afar had to do. I heard it was amazing and just what we were all kind of hoping for; which of course made me even more filled with regret of working the floors so much that I missed it. Thankfully for all of us though we all get a good look at what was being shown off at E3 for The Phantom Pain. Looks like those pains are going away as it looks like the whole forty minute demo from Konami has been made available for us all to watch and see what other features we have yet to see in the game were included in this demo. It could have been just forty minutes of Snake just running around after all.

I won't spoil too much for those who want to have that small feeling of being in the E3 show floor watching that special Metal Gear Solid V: The Phantom Pain video in the crowds. What I will say is that we do get a good look at the buddy system in The Phantom Pain and how they will interact and aid Snake during missions. Not only that but we get to see some of the real bonuses for extracting enemy NPCs back to Mother Base and how the game's AI will change based on your gameplay. From the looks of it if you don't mix things up in Metal Gear Solid V: The Phantom Pain you will quickly find the enemies using your own tactics against you and this includes leaving decoys and traps for you all dynamically.

Enough talk and now more of Metal Gear Solid V: The Phantom Pain. Have a fun time watching this like Snake as you will most likely be sneaking clips while your boss walks back and forth.

Did you have that great feeling of being on the E3 show floor watching Metal Gear Solid V: The Phantom Pain live now? That doesn't matter really as the big question is what did you think of the new looks at the Buddies and the game's AI? Kind of a game changer if you can't use your master sneaking skills all of the time to get through The Phantom Pain. I won't complain as this does look to be Kojima Productions' magnum opus when it comes to Metal Gear Solid titles. I am not sure what more we can see for the game before launch but I have a feeling that Konami has a few more things up their sleeves to appease us all and we will have it all here for you.

Keep checking back for more updates on Metal Gear Solid V: The Phantom Pain as they come in. Until then join the conversation, or start it, on what we were all just treated with for the game. September 1st seems so far off now.