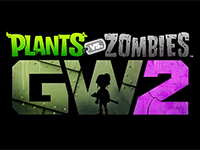 Two years ago we had a huge splash with the Plants Vs. Zombies franchise during EA's big E3 showcasing and again they have blown it out of the potted plant again with Plants Vs. Zombies Garden Warfare 2. Not only has Pop Cap been working on all their other IPs and keeping the original up and running but now we are getting a sequel to the amazing arena shooter that a lot of people may have never knew they wanted. At least I knew I wanted it and I was lucky enough to not only see but play Plants Vs. Zombies Garden Warfare 2 while on the show floor. This will make the long wait until next Spring to play the full game on the PS4, Xbox One, or PC a little nicer and I'll try to give you a good heads up on what I was able to experience.

So to start things off in Plants Vs. Zombies Garden Warfare 2 we are looking at a world where the zombies have pretty much won out and now the plants are on the defensive. This means more zombie based arenas and locations or at least locations that have been altered to fit their motif instead of seeing a ravaged Suburbia. For the purposes of the demo we were inside one of Dr. Zomboss' manufacturing facilities holding off waves of plants whom wanted to take back control. Pretty much the standard of the Plants Vs. Zombies games just from the other side of the fence. Although truth be told the design and look felt quite a bit more like Garden Warfare just with the new characters which was nice to get into the swing of things but didn't truly show off anything new there.

From there we received our first real taste of the new zombie characters coming to Plants Vs. Zombies Garden Warfare 2. At least for me I was able to give Captain Deadbeard a run for his money as I tried out all of his new features and abilities for the game. While everything looked different and was slated to play different he handled just like an engineer currently does with the exception that he can't move fast and has a sniper scope. I'm not sure if he can be completely called a new class but more along the lines of just being and altered one just for Plants Vs. Zombies Garden Warfare 2. This is funny of course because the other two seemed to have even greater changes, at least from the looks of things, that made them feel new for the game.

All of that said it is also worth noting that you will be able to carry over all of your characters and unlocks from the first game into Plants Vs. Zombies Garden Warfare 2. With that little perk this does make it feel a bit more along the lines of what happened between Rock Band and Rock Band 2. If so I won't complain as it was worth the upgrade to the new features and have the ability to not lose anything purchased or worked for over long, long hours of gameplay. If nothing else, if Plants Vs. Zombies Garden Warfare 2 speeds up the server and load times over the last version then we will have yet another great arena shooter to sink our time into and choose how to split our gaming time between. Just what I think Pop Cap and EA want; or at least want us to choose theirs for.

Like I have made apparent I only had a very small taste of Plants Vs. Zombies Garden Warfare 2 so this judgement is a bit skewed. I am hoping to get my hands on the other characters and modes in the near future or at least in video format so we can see the huge differences between the first and second games besides just the obvious. Of course we will have all of that as Pop Cap releases the information over time so be sure to keep checking back in for all things Plants Vs. Zombies Garden Warfare 2 as you won't want to miss out. Or at least miss out if all we have to report is that it is the same game just with new characters.