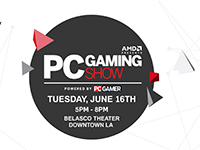 It is time to wrap another first for E3 with the last press conference of the show with the PC Gaming media briefing. It has always been weird that we haven't had one of these since I began going to E3 myself as PC gaming has and always be such a huge thing in the industry. I guess a bunch of like-minded people thought the same, hence why we are getting this kind of media briefing. I am truly interested in seeing what and who will be showcasing their games. Maybe this is where we will be getting our Half-Life 3 announcement as all of the other pined for games have made a huge comeback this year at E3 and the PC Gaming conference would seem the perfect place to do it.

I am also curious to see what may be announced here for PC gaming and most likely some cross platform gaming too. In today's game engine age it is getting easier and easier to cross develop and publish so maybe all the console gamers will have a few more surprises that the master PC gaming race will be willing to share all around. The list is so long I can't even fathom what could be on the docket. Hopefully Portal 3 of some sort is there for me. But there have been so many developers coming up that the list could be endless for PC gaming. Come on Naughty Bear 2 officially for PC and shown here.

What are you hopeful to see at the PC Gaming press conference here? Go ahead and list out all of the PC games that some of us may not know of and can expect in the following press event. We can even keep the ball rolling by discussing all things E3, PC Gaming, and gaming in general down in the comments. Our boots on the ground at E3 will do their best to cover everything in the PC gaming realm so be sure to keep locked in here for all things gaming and PC gaming at that. Watch and enjoy.