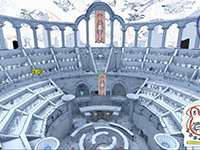 Last week we got our first really good look at one of the characters for Drawn To Death as we lead into all of the big news for E3. Last night (6/11) though during the Sony San Diego Studios stream of Drawn To Death, the team from Bartlet Jones showed off the build we are all going to get to play out there but also a new character and a new level for the game. Not only that but a few more details that have yet to be completely nailed down for Drawn To Death since its first showing during the PlayStation Experience. All kinds of news for this 3rd person free to play PS4 exclusive. That's why I am here to break it down for you just in case you missed it the first time around.

Of course if you want to not read all of this about Drawn To Death you can see the archived footage for the stream down below, but why would you want to go and skip on ahead?

Anyways, first off it looks like the core free-for-all gameplay is all based around players vying to get five kills total first. This sounds rather easy to achieve but you also lose a point/kill each time you are shot down and muderized in Drawn To Death. Of course that isn't the final mechanic as the game is still a work in progress but that is the short and curlies of it all here. There was talk about having percentage of kills to equate out to 5 total kills but in the end it looks like Drawn To Death will have score based on your personal kills and deaths trying to balance out to a positive number when all is said and done to determine the overall winner of the match. This could mean short matches for overly skilled players or very long and drawn out ones.

It also looks like not only will the environments hide little story elements for Drawn To Death and the characters involved but in some instances the levels will be able to interact back and allow for match changing events. One instance of this shown is the alien creature in the Alien Town map. If you shoot the creature in the eyeball he will lash out at anyone who is in the area. I am sure that there will be many more of these across all of the levels in Drawn To Death but this was the main one that was shown during the gameplay here. It is nothing totally new for the genre of shooters but it looks like it is being handled with care in the levels here for Drawn To Death. I can't wait to see what other level events can take place.

Speaking of levels, we were also shown the new coliseum level for Drawn To Death which looks pretty much as you would expect. The one major difference for it from the Alien Town one is that the level itself has all kinds of moving parts to keep the area constantly changing. This is a nice little touch to things in my opinion as it makes the map feel like a living thing in the main character's imagination and not just another map for the game. I guess this is a bit more of the in game storytelling at work while still keeping the playing field a bit leveled for all. It does make me wonder about the other levels that we will be seeing pop up here as Drawn To Death gets closer and closer to being complete.

Lastly, before I shut up and let you move on to the video below, we have the new character of Shark Girl for Drawn To Death. That is a working title and not completely new for those who have been following along with the development for Drawn To Death but we did get to see her in action for once. She has a samurai sword at her side for attacks and an anchor on her back that can lock other players in place if it lands a hit. She is still very much a work in progress but it is an amazing sign at how outlandish Bartlet Jones is willing to go with keeping things original and feeling fresh. Plus it also made the little things like the reticle for targeting stand out a bit more as the rest all kind of have the same feel; at least they have to me.

So what do you think of Drawn To Death now? Does it look like it is going the way of being a success for the PS4 free to play market or do you think it will fall through the cracks of our attentions? Are you excited to see what is in the most recent build for Drawn To Death? Let us know down in the comments and as with every game keep it locked in here as we will update as we can. More so after the next week of video game bliss we all call E3.