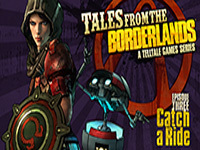 While the only official date for the new episode for Tales From The Borderlands is June 23rd I think it is safe to bet that they will follow the normal structure. Meaning Steam, PS4 (NA), PS3 (NA), and PS Vita (NA) will get the episode on June 23rd as the stores update. Then followed by the Xbox 360, Xbox One, PS4 (EU), PS3 (EU), and PS Vita (EU) on June 24th. Then lastly Tales From The Borderlands' new episode will show up on the Android and iOS systems on June 25th. It's not like the platform's stores will be changing their update days and time…unless that is an E3 announcement of some sorts. Doubtful though.

So what do you think is in store for our unlikely heroes in this episode of Tales From The Borderlands? Are all of these red herrings to throw us off or are we going to see some odd team ups in the story? It is an interesting tale that is being told after all. I just wish we didn't have to wait so damned long between each episode of the game. Do you feel me? Let me know down in the comments. Also keep it here for more on Tales From The Borderlands' third episode as we get more details and an official trailer for it. You know it is coming…