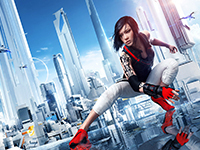 If you were holding your breath for any updates on Mirror's Edge 2… please stop as you will be killing yourself as we are not getting that game. Don't fret though as we are still getting a Mirror's Edge title as EA and DICE have promised in the past but in this instance it looks like the franchise is getting rebooted in sorts. All in the way of Mirror's Edge Catalyst. That is the name of the game so you can go back to holding your breath for anything else about it. But hey, we are still getting a Mirror's Edge title when all is said and done and it isn't just a remaster for the PS4 and Xbox One.

Sadly until E3 this is all that we have for the Mirror's Edge franchise and Mirror's Edge Catalyst. A name and that we will be seeing it in action in the next week. "But you said it was a reboot of sorts?" Of course I did and that all comes from the Senior Producer on Mirror's Edge Catalyst and her blog update on the official site. You can spy it just below but it does pretty much say that they are looking to bring Mirror's Edge to a new generation and they are doing that through Mirror's Edge Catalyst. If that doesn't scream at least a basic reboot where players don't even need to know about the original Mirror's Edge then I don't know what else would; outside of someone over at EA or DICE screaming it from the rooftops.

Here's what was said and the official announcement for Mirror's Edge Catalyst.

Two years ago we revealed that we were making a new Mirror’s Edge™. Last year, we gave you a behind the scenes look into some of the early progress we had made. And though we haven't said much else in all that time, we have been listening. Thank you for your incredible passion and your patience. I'm excited to tell you that it's paid off — by this time next week, you will have finally seen more of the game at E3.

Mirror’s Edge has always had a special place in the hearts of all of us at DICE. The first game had a lot of promise. It was unlike anything else in terms of the gameplay and style — it had a unique soul. But as much as we loved that game, we knew it could be more. So that’s what we have set out to do as we introduce Mirror’s Edge to a new generation.

The team has spent a lot of time re-evaluating every aspect of the game and making it a new experience. This is not a sequel, this is not Mirror's Edge 2. We have landed on a vision that honors the first game — pushing the boundaries of first person movement and diving deeper into the story behind our heroine Faith — but also brings a lot of great new, interesting gameplay and features to the experience for our players.

So on behalf on the entire team here at DICE, we can’t wait to show you what we have been pouring our heart and soul into. We can’t wait to introduce you to Mirror’s Edge™ Catalyst.

Were you hoping for Mirror's Edge 2? Were you just hoping for some form of Mirror's Edge and Catalyst is going to sate that hunger? Do you just want to see the game in action before you make any judgments and see if this version is going to do the franchise justice? Give us all those juicy comments down in the section for them and let us discuss. Be sure to keep it here as we will have more on Mirror's Edge Catalyst as soon as further details are released and shown to the world as a whole. I just really hope they keep the core basics at the very least and just give us more of the Parkour and Faith we have all grown to love.