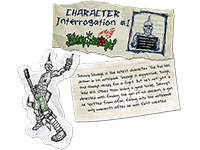 Up until now we have had a very basic story and character breakdown for Drawn To Death. Bartlet Jones has given us some between last year's PSX show and now but nothing too substantial. I'm guessing this is partly because they were still working on all of the kinks and partly because they wanted to have something amazingly over the top to show off at E3. This is the company's first big title and as it is an exclusive on PS4 Drawn To Death has a lot to deliver for us all. That has to be an unnerving feeling for sure but one that I feel the developers will take in stride and succeed based on what I've seen and experienced so far.

Back to the Drawn To Death topic at hand though.

It has been explained many times so far that Drawn To Death will most likely not have a story mode. In fact most of the character's story and background are being placed in the levels and not being given direct narratives. Given a recent update to the Drawn To Death website though we have our first real look at the story behind the game's punk rocker with an attitude: Johnny Savage. Not only do we have a quick glimpse as to who the character is but we have a look at how all of his attacks and moves have evolved since the first demo was shown to the world and gaming communities last December.

Here is a quick look at Johnny Savage's story for Drawn To Death. It is short and surprisingly sweet… So he's in it for love and his guitar is in it for revenge. At least that is how it would all seem from the above story and character breakdown for Drawn To Death. I am curious to see if this will be expanded upon in game or if the lore will mainly be all outside of the game as there is no room or time for full stories to be written on the wall of Drawn To Death. I mean, the blood stains would kind of bleed together, pun intended, to detail everything out. None the less we have a nice look at one of the character in the game.

Over on the Drawn To Death website you can also see how some of Johnny's moves can be performed as well as other features he will have when all is said and done. He will have a few mighty specials that work extremely well against one character and can heal another. He will have a rage mode that will double his damage when his health drops below 30%. Also interesting to note, at least for Johnny here, Drawn To Death will have a system that will have you doing more than just pressing the attack button. Johnny here has an attack that will require special button timing to extend out the damage caused by his special so there will be some skill required outside the norm for arena shooters.

Given all of this new Drawn To Death knowledge what are your new thoughts on the game? Does it look like Bartlet Jones is taking all of the thoughts, comments, and feedback we have given and put it to good use? Are you like me and just want more for Drawn To Death? Let us know down in the comments here. Also keep a sharp eye out here as we will be bringing you more on Drawn To Death as it gets released out into the wild here. Hopefully we will see a lot more in short order leading up to the next big showing at E3.