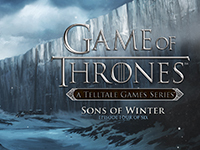 We are back into the world of Westeros with Game Of Thrones: Sons Of Winter even though it may have taken quite a bit of time since the last episode came out for the game. I truly do wish that Telltale would alter their release schedule so we don't have to wait so long between like we did for Sons Of Winter but I don't see that happening soon nor should we discuss it as we are here for the latest review for Game Of Thrones. Did it add to the overall experience or was it another let down to make us question why we are doling out cash for this? Here's what I think in our review for Game Of Thrones: Sons Of Winter.

Things are starting to hit their climax here in Game Of Thrones as we pick up off where we left all of the characters in the story. We have Forresters in King's Landing, Meereen, The Wall, and still holding down the fort in their homeland. Not only are they all spread out we have people trying to take away their trade supplies, their homes, their wives, and their lives so things are not looking good for the family. Thankfully there are plans in action all over to try and save everything and bring the family back into great power. In this part of the story all of that hops into action and we can start to see some glimmer of hope for once in this telling of Game Of Thrones.

Truth be told, for once, there was not much I didn't enjoy in this episode of Game Of Thrones. If I had to choose something it would have to be the limitations on answers we can give at certain times in the narrative. Sometimes I can see a better fifth or sixth option to use but still only have the three with the option to stay silent as the fourth. Life doesn't always boil down to this limitation set upon us because this Game Of Thrones is a video game and we can't have all of the responses that the characters should have; even if there are some that are extremely out of character for said character. Sometimes I just want to go all Bolton on some people even though I am playing a Forrester and that wouldn't fit either.

Maybe have a few option pop up that fall in line with how I have already played said character. For example if 100% of my answers leading to a pivotal scene have been one of showing pride and a willingness to stand my ground, don't let me have the option to submit. Why not replace that option with something better suited for the character I have been playing? That would be the only thing I would have wanted out where the franchise has made it too and thus leaving me grasping for things to not like about Game Of Thrones here.

The first thing I need to give praise for in Game Of Thrones: Sons Of Winter is the writing and character development that we had here. It has been the best I have experienced since the very first episode of the game. I don't know where it has been hiding all this time but both new and old characters finally had some amazing drama and growth that brought them out of the single dimension I was getting used to. One new character in particular had a pretty intense story told in a matter of half a chapter which is something to say as I feel most of the character haven't had as much going on for the length of the game thus far. Hells, they all felt to have that form of growth that we should have had from day on in just this episode of Game Of Thrones. Whoever wrote this episode or collaborated need to win an award here.

To go along with the superb story for this episode of Game Of Thrones we also had a few new gameplay options added in. Just like with Telltale's The Walking Dead there was nice little stealth portion added in, some high combat, and a major choice that felt like it had multiple ways to have played out. It broke up the monotony that Game Of Thrones has been suffering with so far in terms of gameplay. That being a bit of story, walk around, bit of story with choice, maybe a QTE, more story with a big choice. This is always something I have harped on in the past for all of Telltale's titles but when they make changes like this it makes the game feel fresh again. It gave me something else to do besides wait for the next great part of the story and for this we have another shining point to Game Of Thrones.

Lastly, and this is a bit personal, more of my favorite characters in the Game Of Thrones universe received more attention in Sons Of Winter. I could watch Ramsay Bolton or Daenerys Targaryen play their roles all day everyday so I get a bit giddier each time they lend their likeness and voice to the video game version of Game Of Thrones. I know I should be hoping for more of the Forresters but we all have our favorites and I have to attribute some of the love I have for this episode to them being in this bit of the story more; not to mention their influences on where it is going to go from here. Now we just sit and wait for the next episode for Game Of Thrones.

Up until now I have been on the fence about telling to pick up Game Of Thrones from Telltale. Up until now it hasn't truly given me anything to demand you drop the money and give the game a whirl. As I said though, that was until now. Just like some of the TV show's episodes it looks like you will need to wade through some to get to the best parts of Game Of Thrones and that would be the Sons Of Winter episode here. Just for this episode alone I will have to tell you that the price for admission is worth it for any level of Game Of Thrones fan. Yes, even the casual one will get a kick out of the story as it is now and I fully recommend everyone getting it just to be able to play Sons Of Winter's story and hopefully forward. Amazing job here Telltale!

Game Of Thrones — Sons Of Winter