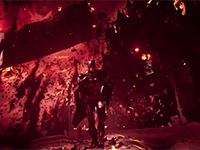 Nothing gets me all choked up than hearing that there will be console exclusive items like we just heard about for Batman: Arkham Knight. Choked up in the worst way and it kind of bothers me that Rocksteady and Warner Bros. are doing it again. Almost exactly how it was done with Arkham Asylum only this time around it is the PS4 getting the exclusives over the Xbox One and PC versions of Batman: Arkham Knight. Oh wait, you are little behind me here as my anger has raged on. Let me get you up to speed so you can see what has me talking out of order on things here for Batman: Arkham Knight.

There is a new trailer out for Arkham Knight that shows off all of the exclusive DLC that will be coming to the PS4 version of the game first. Of course they say first here so we can expect to see it sometime over on the other platforms but none the less all of the PS4 players will be in their little exclusive club. I'll most likely be in said club but it still bothers me since this is how I was screwed out of some fun the first time around so long ago. Let me give you the list of what is coming first for Batman: Arkham Knight on the PS4.

At first glance it doesn't seem like all too much. A few skins for Batman and the Batmobile in Arkham Knight. It is the Scarecrow missions that caught my eye and brought back all of the horrid memories from Arkham Asylum when I was NOT ABLE TO PLAY THEM AS THEY WERE AN XBOX PRE-ORDER DLC PACK!. Can you feel the anger here? These where one of my highlights of Arkham Asylum and I am sure they will be even more over the top in Arkham Knight. That means that I'll have to watch myself on spoilers for my friends who choose to play the game on the PC or Xbox One as I'll have them first. Why even do that?

Hells, I feel bad here even showing the latest trailer for Batman: Arkham Knight as the Scarecrow Nightmare Missions look to be amazing from just the little bit we get to see here in the trailer. I am sure that most of us could care less that there are skins that don't do anything other than make Batman: Arkham Knight a funnier or creepier looking game but don't alter gameplay in the slightest. It is these missions that I am sure will shine and it feels just wrong that we all don't get to experience them because of some deal cut between Sony and Warner Bros. here. The almighty dollar wins out again…

None the less, you can make sure you get all of these little extras for Batman: Arkham Knight by pre-ordering it on the PS4 or hoping that they will hit their respective stores sometime after June 23rd when the game launches. I'll be part of the lucky group who get to experience it all before the rest due to my general platform of choice but that still doesn't mean I don't feel for all of those other Batman: Arkham Knight fans out there who just want to have the same game that we all will have.

What are your thoughts here on the timed exclusive DLC for Batman: Arkham Knight? Am I making a bigger deal than I should be as other titles get the same treatment for different consoles? Does it matter more since it is going to be most likely one of the best add-ons for Batman: Arkham Knight outside of the main missions and now only a fraction of the gamers out there get to experience it in short order? Let us know all of your thoughts on the matter down in the comments. For all things Batman: Arkham Knight keep it locked in here so you can be sure to get all of the great updates and news for the game.