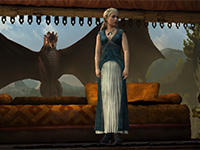 Of course this episode of Game Of Thrones' release follows the normal structure for release as we are used to so expect it on Tuesday, Wednesday, or Thursday as your selected platform gets their normal updates. Now we just have to wait a bit longer to continue the story and see if we can get more people boycotting Game Of Thrones as the TV show recently has done. It's doubtful given the content that would need to be present but who knows? Maybe Telltale is pushing the bounds just for this episode of Game Of Thrones.

Enough of the posturing. Here is the trailer for Game Of Thrones — Sons Of Winter due out next week. Watch and enjoy.

So there you have it. What are your thoughts on the next episode of Game Of Thrones? Does it look like it will keep the flow of the franchise rolling or another filler to lead to the eventual ending? Do you want to fight Drogon again and hope that is in the final game? Let us know what you think about this episode of Game Of Thrones so far down in the comments. Also check back as we will also have many updates for all things Game Of Thrones from Telltale here as well as our own reviews.