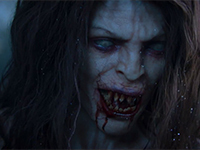 The trailer of course is a pre-rendered affair and not actual gameplay from The Witcher 3 so do take note of that but it is on the level of what we generally get from Blizzard just before any of their launches. In fact not only do we get to see a "Night To Remember" for Geralt here but more on how cunning the character and we will have to be when it comes to surviving The Witcher 3. Of course in this case it is when taking on what looks to be a general Vampiress but creatures can be deceiving in this world so you can make the better guess.

A word to the wise here but the following The Witcher 3: Wild Hunt trailer may not be suitable for offices or other work places. There are some pretty close to nude shots as well as the female monster being nude so you shouldn't watch this where you could be seen and accused of watching naughty things. This will serve as your slightly NSFW warning. None the less enjoy the new trailer for The Witcher 3: Wild Hunt and now we wait for the full release in only a few days' time.

Pretty spectacular piece of promotion for The Witcher 3 huh? Is this the kind of thing that whets your whistle for new titles or would you have rather had more gameplay for The Witcher 3? Do you even care and just love these promo videos that have little to nothing to do with the final product we will be playing? Let us know down in the comments and keep your eyes here as we will update more on The Witcher 3: Wild Hunt as time progresses.