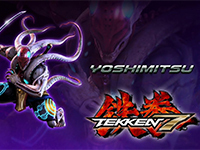 There is still no word on if Tekken 7 will be hitting consoles or the states any time soon but at least we have a look at yet another character that will be gracing the game. In this case it is Yoshimitsu who has been one of my favorites from past versions of the game. He's been absent among the roster in all of the recent outings for characters but now we get a good look at Yoshimitsu in action for Tekken 7. Thank you Namco Bandai for not leaving him out.

Let's have a nice look at Yoshimitsu in action for Tekken 7 now.

So the character moves look to be all in place from previous titles to Tekken 7 but what the Hells is going on with his new look. It's almost like Davey Jones mated with a Twi'lek and then was thrust into some space age armor. I have no doubt that he will most likely play the same when all is said and done but now we have that to look at in Tekken 7. I don't know if I can even handle looking at the new Yoshimitsu character model for the full round without thinking of something overly naughty and Japanese. You know what I am talking about here.

I am extremely curious on the forced change here for Tekken 7. Is this just a skin option and the good old Yoshimitsu will be back in a basic form? Are we going to be given some long convoluted story as to why he looks like something out of 20,000 Leagues? I am just not getting it or liking it. I liked my robotic Raiden reject from Tekken past and not the new Tekken 7 version. I guess it is a bit good that the game isn't slated for a US release just yet for my sake.

What say you though? Do you like the new look for Tekken 7 or is it too much? Is my Western mind just not getting something that the developers do? Do you really care as long as the moves and attack sets are about the same? Let us all know what you think of the new character model for Tekken 7 down in the comments.