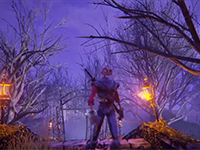 Yet another franchise can't keep things hidden for a great reveal as we now may be getting another MediEvil title for the PS4. Maybe the PS3 as well but if the rumors pan out as Sony has been pushing more for the next gen console I wouldn't hold my breath there. None the less it looks like we either have an amazing fake to get all of the MediEvil fans all stirred up or we have yet another 'leak' of video game information well before it was meant to be released. The internet and want to be "First" is ruining anything that companies need to keep secret.

The following videos and screens for a possible MediEvil title come from a Spanish Gaming news site that also happen to have no sources for where the materials came from. Not even one of those "close reliable" sources that are known for these kinds of 'leaks'. Hence why this is still in the rumor phase of things and not a very credible 'leak' to show off MediEvil in the works. It is worth noting that the seconds of video do have the confidentiality notice at the bottom from Sony Computer Entertainment Europe to try and add credibility to it all but you can't say a MediEvil fan couldn't slap a watermark onto someone else's hobby project.

Of course at this time PlayStation has not commented on the possibility of a new MediEvil title. If this turns out to be a real thing I am guessing it was slated for either E3 or any following video game convention that would follow. Also seeing as the video still have not be required to be pulled down by the hosts it does kind of stab the credibility that this could be a real return of Sir Daniel Fortesque in a new MediEvil title. That could also be me just trying to poke holes in those damned "First" people who need to spoil fun.

What are your thoughts on the possible new MediEvil being in the works? Do you find this all to look real enough to be a true 'leak' of information or does it look a bit shady to you too? Would you like to see a return of MediEvil after a nice decade of being off shelves? Let us know all of the theories down in the comments below.