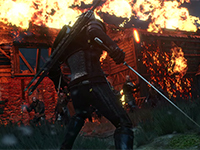 We've seen a bunch on the monsters and gameplay for The Witcher 3: Wild Hunt this week already so why not blow it out with another great look at the combat for the game. Of course that is what CD Projekt RED has done or we wouldn't have had anything to bring up again for The Witcher 3. Not only that but now we have an epic look at how the combat will ebb and flow in the final game and not just when out killing monsters. In fact in this latest video we seem to be killing more and more humans or humanoids in The Witcher 3: Wild Hunt than previously explained.

There really isn't much else to say about this as trailer for The Witcher 3 as this is all just and epic look at the game's combat. That said I'll just let you take that nice long look at the video and then we can go back to the mindless talking I'll do about The Witcher 3.

So there is ride by combat in The Witcher 3: Wild Hunt! At least I hope there is and this wasn't just a really cool animation for promotional use. I don't believe CD Projekt RED would do that given everything else that they have crammed into the game so there is that to get excited about. I mean there is so much going on with the horse in The Witcher 3 so it would make complete and utter sense for it to be in there. That is also me glancing over how much more brutal Ciri looks in this. Kind of like a bad-ass female predator. Excitement levels are now off the chart.

Are you in the same boat as me now? Are you going to rush out and pre-order The Witcher 3: Wild Hunt right now? Do you think it looks just as brutal as any other fantasy based video game? Let us all know so we can read your thoughts and opinions on things. Add to the discussion down in the comments.