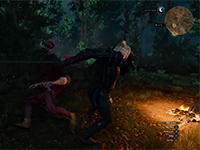 There would be no doubt, if there was, that we are getting close to the release of The Witcher 3: Wild Hunt. CD Projekt RED is flooding us with more and more of the gameplay and creature looks than we can shake sticks at. Odd phrase I know but go with it. None the less we have the first bit of PS4 gameplay to look at now and it still feels like we have seen so very little of The Witcher 3: Wild Hunt so far. I have a feeling that the 200+ hours of gameplay is no joke at all and not just some gimmick. I think I've seen 200+ hours of footage and still feel like I haven't seen anything.

Anyways, as I said we have our first look at The Witcher 3 on the PS4 and a bit more of the combat to enjoy. Not only that but another good look at how alive the game's world feels and is with a good description of the sheer size of said world. Forty minutes to ride a horse from one side of the map to the other unhindered is a lot larger than you would think in your head. Hells it takes me that long to drive from one side of my real town to the other. There better be some good music options in The Witcher 3 to keep me entertained when giving this ride a try.

The Witcher 3: Wild Hunt — Everything You Need To Know

I do find it interesting to find out that CD Projekt RED has been able to encapsulate the story thus far in The Witcher before you even get into The Witcher 3 here. Both of those games were huge as well and that is a feat of storytelling to get everything wrapped up in the beginning. Unless we are talking a nice four hour trailer to start The Witcher 3: Wild Hunt off with then this "feat" really isn't there. I doubt that will be the case and anyone new to the franchise will be able to fully enjoy Wild Hunt and then want to go back and fill in the gaps.