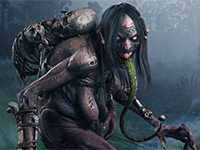 If you had no idea that there were monsters in The Witcher 3: Wild Hunt then why are you even reading this? Monster hunting is what it is almost all about here. There couldn't be more monster hunting if the game was called Monster Hunter. It is not though but there are still loads and loads of monsters and creatures for us to enjoy hunting in The Witcher 3: Wild Hunt and now we are getting a good long look at how CD Projekt RED has designed them all to make us feel like true monster hunters just as the main character in the game is. Isn't that so very nice of them?

We have a new "behind the scene"-like video below for The Witcher 3: Wild Hunt and it gives us a nice long look at how the monsters are not just random spawns in the game for us to kill but part of the virtual ecosystem in the game. In fact in the following video it is shown how the creatures don't just pop up in the world ready for you to fight but are running about for you to encounter; or for other NPCs to encounter; or for other monsters to encounter; you get the idea here. They are just not waiting around for you to kill and you will have to deal with the guilt of killing some poor baby monster's mommy right in front of them.

Another thing that is greatly featured here is the need for us to be more of the monster hunter than Geralt in The Witcher 3: Wild Hunt as we will need to remember our lore and what to use to in which case. I'm fairly certain this is not new for anyone to The Witcher franchise but it will force you have to know that silver hurts Werewolves and Drowners are afraid of fire. That way you can also help speed up those monster hunting raids in The Witcher 3 to get on to hunting humans…some say the greatest prey… Either way it is still a great touch to the game or "meta-game" here.

Have a look at all those monsters and how they were made for The Witcher 3: Wild Hunt.

What do you think about what you've just seen for The Witcher 3 now? Some of those creatures look spectacular don't they? Does it make you yearn for May 19th to just get here so we can all play the game? Let us know what you think about The Witcher 3: Wild Hunt now down in the comments. Let's all get ready for the hunt.