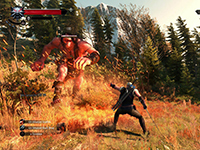 Only a few weeks until The Witcher 3: Wild Hunt will be hitting our homes and we will be hunting down all of those new creatures and villains. May 19th is almost here so it is time to have better looks to make sure that we all have pre-ordered or plan to pick up CD Projekt RED's next installment to The Witcher franchise. In this instance though we have a new look at some gameplay, a handful of new screenshots and a look at how massive the map and world of The Witcher 3: Wild Hunt will be. The game has been touted as having over 200 hours of gameplay available out of the box after all.

Speaking of the game's map, that happens to be the first thing up on the plat here for the new looks. Every time I have seen The Witcher 3: Wild Hunt's ma in the past I knew it was large but never had any clue until now. In fact the following video shows about a minute of solid travel going on in the game and yet we are still not even a fraction of the map along the way by the end. I guess it is a really good thing that Quick Travel locations are set up in The Witcher 3 or this whole game would end up being one long Hobbit tale instead of an epic battle to save the world and kill a bunch of horrid creatures out to snack on humanity.

Next in the line we have a whole bunch of new still shots for The Witcher 3. There's a bit of romance. There's a bit of combat. There is also a great look at the massive environments that are filled to the brim with all kinds of things. CD Projekt RED need to fill the maps of The Witcher 3: Wild Hunt with stuff and it looks like that job has been done ten times over and we are still only talking about still shots for the game. Sheer madness yet it is the kind of madness that will lead into the 200+ hours we will sink into The Witcher 3 once it finally hits.

Last up on the plate here is just more of the promotional stuff that will get all of those non-hardcore gamers' panties bunched up with how good The Witcher 3: Wild Hunt might look. Okay, not really as it is all pre-rendered footage but it is how we should all feel as we dive into the game's world, save the innocent, and kill monsters who are just trying to live their own lives. Have a fun watch and then give us all of your own thoughts on everything for The Witcher 3: Wild Hunt down in the comments. I swear we read them when they come in.