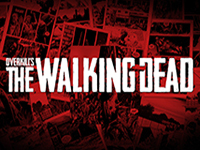 Not the biggest or most shocking news here but it looks like Overkill's The Walking Dead will be coming to consoles through 505 Games. They will be known for working together in the past for the Pay Day titles as well as the critically acclaimed, on this site, Naughty Bear. This of course all makes perfect sense given the fact that Overkill's The Walking Dead will be another Pay Day-like title and the two have worked well to bring those titles already so it was most likely the safe bet that this was going to happen sooner or later. Now they have a lot of time to run some amazing ad campaigns like they did for Naughty Bear.

Partnering with 505 Games partner with us on the console publishing for ‘Overkill’s The Walking Dead’ will streamline the distribution and marketing of the title in the traditional space and on the digital console marketplace. Having worked together before on the successful Pay Day-franchise, we are certain this will be a fruitful collaboration.

Now that we know who is going to be bringing us Overkill's The Walking Dead on our chosen platform all we have left is to sit and wait to see something new for the game. Unless you are one of those people who are all about publisher/distributor loyalty here. If you are let us know what you think down in the comments below. Also throw out your favorite Naughty Bear event as it is always something we love talking about here. Hopefully soon Overkill's The Walking Dead will be listed there too.