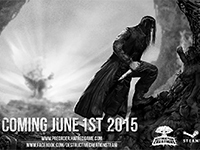 Love the idea or hate the idea, Hatred now has a solid release date. Well at least for right now Destructive Creations is 99% sure that the release date for Hatred will be June 1st on the PC via Steam. These are video games though and we all know how dates can get shifted around but as of right now that is the date for all of you to go out and play Hatred or try and form some kind of boycott as you are not fans of allowing artists to create what they like. If you don't like it then don't experience it. Who are you to stop others who may want to play the latest AO title known as Hatred?

This announcement also comes along side with a new gameplay trailer for Hatred. A new trailer that lists all of those police and military that will be trying to stop you on your genocide as "Human Shields." I'm not too sure how that all fits together correctly as I know human shields to be something different but you say potato and I say potato. You read that in your head as the two different ways people say potato right? That was how it was meant. Now let us get back to Hatred.

We wish to announce Hatred's release date, it's set for June 1st, this year of course. ;)

For 99% it's a final release date, as the game is almost complete at the moment, we're on the final polishing stage. Fun fact is that we wanted to release it on May 19th, but our team will be occupied with playing The Witcher 3 at the time. :D

Along with this great news, we wish to present you the last gameplay trailer. It contains intense footage of our gameplay, we're showing much more than we ever did. We hope you'll like it and spread it on the web.

Maybe it is just me but Hatred looks like it has been downscaled a bit in the visuals department here. Almost like Destructive Creations had to remove polygons to either fit the Steam build or they had to appease the ESRB by making the violence a bit less realistic. Not that any of the violence in Hatred really seemed that way to me but I can see the ratings board wanting it to allow the game to even get past their judgement. Hatred can't be all bad right? It did actually get out of the ERSB's system and ready for us to play on June 1st.

What are your thoughts on Hatred? Almost everyone who has seen or heard of the game has had some form of feeling one way or another since it was first shown. Are you going to embrace Hatred or be one of the one's silently boycotting by playing Mortal Kombat X online? Let us know down in the comments.