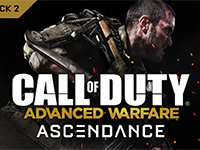 If all of you non-Xbox Call Of Duty: Advanced Warfare players out there were feeling a little left out with the second DLC pack that is part of your Season Pass, now is the time to know you won't have to wait much longer for the pack to hit the PS3, PS4, and PC versions of the game. You will know now but still will have to wait until April 30th as that is when the pack will be available for you to download and enjoy in all of the new features, maps, and Exo Zombie fun that the Xbox 360 and Xbox One players have had for a month already. I guess it is nice that the multiplayer servers don't go cross platform as that would be one hell of an advantage that they would have from day one. Now we will all be up to the same speed for Call Of Duty: Advanced Warfare and the DLC.

By now I am sure that we have all seen this Call Of Duty: Advanced Warfare DLC in action via web videos but for those whom may have forgotten here is a list of the maps we can expect to have once the Ascendance DLC hits. We can all forget a lot over the course of the month that Microsoft had the exclusive bit here. I only wish that Activision wouldn't cut these deals so we could all be in on the fun from day one. Oh well…

Are you one of the players out there who had to wait for this new DLC pack for Call Of Duty: Advanced Warfare? Did you forget it was even coming? How excited are you to be able to hop in and continue the Exo Zombie fun that has already been placed out there for us? Sound off like you have a pair down in the comments and let us all know.