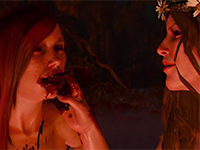 Earlier this week we had a very lackluster spoil of the first bit of gameplay for The Witcher 3: Wild Hunt. It didn't show off anything more than the fact that whoever was driving the demo over at IGN wasn't aware they had to make the action look amazing. Either that or whoever it was from CD Projekt Red wasn't on their A-game when capturing that. Thankfully we have a new look at The Witcher 3: Wild Hunt and all of the ins and outs that we can expect from the game when it finally comes to the PS4, Xbox One, and PC on May 19th.

This time around it looks like we have someone editing the trailer here for The Witcher 3: Wild Hunt in a way that actually puts the game back into its shiny phase that it was a few weeks ago. A lot can be said about having a good player playing a great game and a bad player playing the same game. They just don't look right and that seems to be the case here for The Witcher 3: Wild Hunt. Not only do we get a great look at the game, we also get a great look at some of the new things coming in The Witcher 3 including new monsters and scene playing out based on choice.

If you are trying to go as spoiler free as possible for The Witcher 3: Wild Hunt I'll tell you that this latest view gives you more excitement without truly giving much away. Have a look and enjoy even if you are one of those spoiler nuts out there.

I don't think I could have been more sold on The Witcher 3: Wild Hunt now than ever. The story looks like it is going to be worlds more open and not as linear as I have seen from all of these other videos in the past. I am also curious to see how many real world myths and tales that have been mixed in here for The Witcher 3 than the standard fare we usually get. Give me something obscure and out there. I know you can do that and most likely have CD Projekt Red. I just hope that you've kept those secrets truly well-guarded and we'll see them on May 19th.