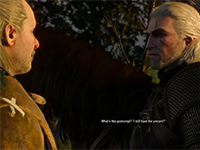 Just in case you were truly jonesing for some new gameplay for The Witcher 3: Wild Hunt then we have something in store for you. Well at least if you want to watch someone poorly play through the first 15 minutes of CD Projekt Red's new game. Yes, it looks like some of the big press sites have had a chance to give the game a spin in its current state and now we can spoil the first bit of The Witcher 3. How nice is that? Maybe it is due to the fact that we have been given all of the fun details for the gameplay already and they don't want us to forget that the game is still coming.

If you don't believe me then you can look just a bit lower and see how poorly IGN played through The Witcher 3: Wild Hunt. It is just about as bad as all of those fine folk over at Amazon playing Mortal Kombat X over the weekend sadly.

I guess it was nice of them to have skipped over the first cut scene for The Witcher 3 and just dig into the gameplay but they could have made it all a bit more interesting to watch. I guess this is why I'll never get "Let's Plays" and that whole mentality. Nothing new was shown off and there is nothing more to entice us for the release of The Witcher 3: Wild Hunt. I think the developers have done a great job in that aspect so this feel more like the fluff we are going to get as we wait for May 19th. I am actually perfectly fine with this as I already thought we had all of the details we needed back at E3 in 2014; we just had to wait for the team to get everything in full working order. Now we just get to watch people poorly bring us their look at what is most likely going to be a huge title with The Witcher 3.

Of course I could be way off here for The Witcher 3: Wild Hunt so what do you think? Do you like these spoiler types of videos from major "paid" outlets or do you want to see core mechanics and gameplay so you can save everything for launch day/week? Are you more or less excited for The Witcher 3: Wild Hunt now? Let us all know what you think about this down in the comments. Hells, even if you skipped the whole spoiler here let us know.