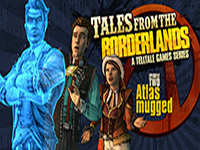 As is always the case with Telltale's episodic adventures we meet up with our "heroes" Rhys and Fiona in their misadventures of retelling how they are now in the spot that they are in. Last we left they had just found what they thought was a Vault Key and Rhys was just starting to wig-out. All because Handsome Jack in now in his brain somehow. The group now has a destination and what looks like a key to unlock riches and fame so they set out. Only this is a Borderlands title so nothing is going to work out nice and easy for the group and they run into a few of the enemies from before. Damned Hyperion and their mooks…

This portion is going to be nice, short, and not-so-sweet. In this episode of Tales From The Borderlands it really didn't feel like any of my choices were really open to me and were more forced. Not just because I want to play my version of Tales From The Borderlands a specific way but because most options led to a game over screen instead of some kind of messed up outcome. This was pinpointed even more when you get the option to kill one of the antagonists in the story and are given three options to choose from. Each, as I experienced, led to Rhys dying and having to reload the scene until I selected what I am assuming Telltale wanted me to so the story could progress. This was not the only instance but it was the stand out in the episode. I thought that Tales From The Borderlands played out based on my choices not what I was being force fed. Either way, mark this under hated.

While the core mechanic for Tales From The Borderlands seemed to be on the sideline for this episode that does not pull away from all of the story and alternate ways to use the QTE system. This episode has me questioning why I am not a bigger fan of Borderlands in general as the characters, world, and story being written here in Tales From The Borderlands are things I can see myself enjoying multiple times over. With this title I'll most likely wait until the full season is out but I will be playing again a few times just for the story and we are only 40% into the whole damned thing. A tip of the hat to the writer(s) for Tales From The Borderlands as you've been able to do something a lot of titles struggle with and that is a good story. That is definitely under control here.

Like I mentioned, and this goes out to the gameplay designers, Tales From The Borderlands: Atlas Mugged does reuse the same style of QTE system as we are used to from the developer but given the world that it is set in they seem to come up with different ways to use things. I particularly enjoyed not only the opening "chase scene" but also the little bit where you have to carefully scoop out an eyeball to use. I've probably used the control scheme an uncountable number of times between Telltale's titles and others trying to use it but somehow again in Tales From The Borderlands' second episode it feels fresh and not the same old Press-X-To-Win structure of things. I am ready for episode three now just to see what else is done here.

I give Tales From The Borderlands — Atlas Mugged 78 bonerfarts on the bonerfart scale.