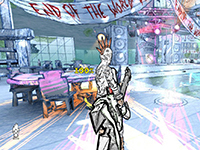 It's been a few months since we first saw Drawn To Death during the PlayStation Experience. The people over at the Bartlet Jones Supernatural Detective Agency have been very adamant on keeping all of the fans in the loop as they can. This is in the form of answer questions, listening to player feedback from, as well as having rather spirited back and forth conversations where it feels like fans truly have some input on how Drawn To Death is being developed. Hopefully you've had a chance to goof around over there and see what is coming for the PS4 in way of this title.

If you haven't been able to (What is wrong with you?) you may have also missed out on some of the new shots for Drawn To Death as well as a bit of insight into how the game is going to play out and other questions. One of which being if there is going to be a story mode included in the game or how the overall story of Drawn To Death will be presented to the player as all we have seen is the free-for-all multiplayer for this free-to-play title.

For now, let's start with the new images we have here for Drawn To Death. One of the big complaints I heard and have read for Drawn To Death was that the style of the game made it a little hard to see your opponents and actually target them. For me it took some getting used to but wasn't too difficult once you trained the eye. In a gaming culture now that doesn't really want a learning curve I see how this complaint can be valid. It also seems that the developers did too as the new shots we have below definitely make the distinction between character and the world insanely more obvious.

Have a look at what we have for Drawn To Death now.

If my eyes are not deceiving it does look like the player is going to stand out extremely better in Drawn To Death based on the above images. If nothing else, the new levels that have been designed look spectacular and have a lot more life than what I experience at the PSX. It also should be a bit more proving that Bartlet Jones is listening to fans and trying to make Drawn To Death the game that will keep us all engrossed in their work until they can churn out whatever they may work on after Drawn To Death launches completely. Above I also mentioned something about a story mode for Drawn To Death. This of course being another hot item given the history for a lot of the people involved in the game. They all have a strong narrative game background so it would be assumed that there is going to be something like this for Drawn To Death. That is not the case though at this time as it would seem that the overall story for the characters, playable and non-playable, will be told with items in the background of Drawn To Death.

Not only will we have to keep a sharp eye out for the other players in Drawn To Death but if you want insight into who the artist is for the world and why he is drawing what he does, clues will be scrawled on walls and environmental pieces throughout. This is a game about a kid who doodles and draws to express himself so it makes sense that the subconscious would show up. Hate speech on a wall directed at a father figure to describe a bad relationship there. Idolizing a female that the artist may have a crush on. Things like this to guide us but no official story mode yet for Drawn To Death.

Given all of that, what do you now think of Drawn To Death? Does it look like it will be a bit easier to hunt down and kill your opponents? Do you like the way that a partial story may be told in the game? Draw us a word picture down in the comments section.