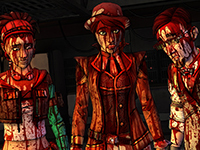 The second episode for Tales From The Borderlands will finally be out next week and we've already seen the trailer for it. At least hopefully you have seen the trailer by now and have started the excitement train rolling for the release. If not or you want more then you can take a look a bit lower to see some new screenshots for Tales From The Borderlands' second episode and they show the characters in some pretty hairy situations. Including a scene where the cast is covered in blood for some reason or another. It's a Borderlands game so there is totally a reason.

Did you spy any hidden Easter Eggs in those images for Tales From The Borderlands? I haven't yet but I am not looking all to close at them to try not and spoil too much for the next episode. That's just how I am here as I've loved what I've played thus far for the game and want all the surprises to feel fresh. That's how we should all want Tales From The Borderlands to be here. No? I guess that is why you are here though. To spoil a few things and get hyped for the next release. No judgment here. None at all.

So did you spy anything I missed before? Are you holding out for the full season of Tales From The Borderlands to be released first? Did I spoil more of the next episode for you than you wanted? Bitch at me and let the world know your complaints down in the comments.