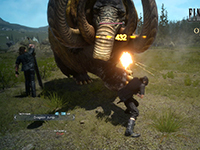 If a week still feels like too long until we can get our first real taste of Final Fantasy XV in the way of the Episode Duscae demo then we have a plethora of new stills and gameplay for you to have a look at. All of which is fresh from PAX East and shows off a bit of the English version of the game as well as a bunch more in the native Japanese. What do we expect from Square Enix after all? They are working so hard on making everything in Final Fantasy XV look amazing for the PS4 and Xbox One so we can't really complain all too much now can we? Well we can but now we are getting off-topic here.

So what can be seen below for Final Fantasy XV is a bit more of the game's world and creatures, a bit more on the live Kingdom Hearts looking combat, a shop system and a bit on the leveling up system. You'll be required to look at everything we have to offer here to get the full scope and look at what was listed. You're here so I am sure you have the time to kill and you won't be let down on what we have to see for Final Fantasy XV. It'll also help kill the time until Final Fantasy Type-0 HD releases and the demo of the game will be playable. Use it all wisely. Or not. It's your time after all…

It isn't fully detailed in anything above or below but it is a bit curious here that in Final Fantasy XV you will not level in the traditional sense we are all used to. Generally when playing Final Fantasy we get into combat, we get XP, we level as we go. In Final Fantasy XV it looks like you still get into fights, collect XP, but you don't actually level until you bed down for the night at a campground and, presumably, an Inn. This is where all of the XP is used to level your character. Think of it like you are banking your XP while fighting all day and then you could potentially gain five levels when you camp making you way stronger the next day.

This seems like an odd deviation to add into the mix for Final Fantasy XV. Unless of course you lose all of your gained XP if you don't camp and then die at some point. This would then bring is a bit closer to the pen and paper style of role-playing games out there. It would also lead to a lot of frustration if someone has been monster hunting all day in Final Fantasy XV and is on their last bit of health only to die just before bedding down. This of course is only speculation but that would seem the reason to break the leveling system out like this for Final Fantasy XV. I guess we'll find out in a few days with the demo about to be released.

Did you like what you just saw for Final Fantasy XV? Probably a bad question to ask. Do you see any merit in holding the XP for the day until you camp? Do you think I am full of shit? Let us know all of your thoughts on that and Final Fantasy XV in the comments below.