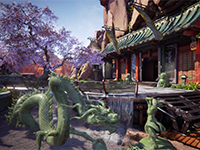 If you missed out the first look at Project BlueStreak during PAX East then you are in luck as we are here to help you out. It looks like Boss Key Productions, the studio started by Cliff Bleszinski after he retired and then came back into game development, only wanted to make those who were able to attend the panel during the convention feel special for a few days as now the whole world can see the non-pirated video. Okay, that may be a little harsh if taken out of context but none the less we have the first pre-alpha teaser for Project BlueStreak which is the developers first upcoming title that will be, as we could guess, an FPS using the Unreal 4 engine to build an run the whole thing.

I'm sure you want to see what is in store for us with Project BlueStreak and the high frame-rate that Boss Key wants to ensure we have with the game so I'll let you have a watch. Hells, I'll have another watch of the Project BlueStreak pre-alpha teaser so we can all discuss down below.

So, yea… this looks just as promised. This is a multiplayer map in the works for Project BlueStreak. Not only that but I am pretty sure this was built with all of the starter content that is supplied for first time developers with the Unreal Engine. I've been tinkering around with it since early UE3 and I am pretty sure this "map" for Project BlueStreak is comprised of a lot of the basics packaged free for all right now. This seems odd as it is coming from a well "respected" developer in the industry who brought us all Bulletstorm and Gears Of War in his past. Maybe this is just a joke or truly a pre-alpha level with just placeholder assets? Maybe?

As of right now I'll give Project BlueStreak the benefit of the doubt and say since it is slated as a pre-alpha build that the level designers and artists are just showing what they could potentially do once they get their original art and design pieces in place. If not, then this really looks like Project BlueStreak is going to use all of the fan-boy/girl mentalities against them as "OMG anything Cliffy B makes is gaming gold" as I have heard on a few occasions in my travels. Then again those are the same people who refused to see any faults in games like Bulletstorm and Gears Of War because they didn't want to look past the name slapped on the side of a box and any true innovation after the first design.

What do you think though? Is Project BlueStreak going to just be another Unreal shooter that fan-boys/girls will latch onto even though it is the same game they've played umpteen times already? Do you think that being in pre-alpha this Project BlueStreak teaser is, like I said, full of placeholders while the team rocks out the rest? Let us know down in the comments. Also not that I am aiming most of comparisons toward the one person everyone knows and not the whole team of Boss Key.