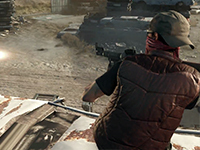 Battlefield Hardline is out in just over a week so you know what time it is? LAUNCH TRAILER TIME! Now queue the wacky sounds and inappropriate screams as we move on to watch what Visceral Games and EA have to show us to try and lure in those who are still holding out on Battlefield Hardline. This goes double for all of you out there who are bitching that it will only come with the resolution of 900p on the PS4 and 720p to the Xbox One. Most of you won't even see the difference but those in the know throw around the numbers and you latch on as you know the difference. That is why we get these cool videos and trailers to keep us looking at Battlefield Hardline despite this bullshit.

Don't get me wrong, I know the differences in the resolutions and will most likely see them when Battlefield Hardline launches on March 17th. I've trained the eye for these kinds of things. But if you are truly worried about this then don't look to the console versions of Battlefield Hardline and go PC. Then you are only limited by your video card and your monetary resources. Those people will appreciate the resolution issue then. At least one of us would hope so. Or all of us. Or Visceral Games and EA at least.

Enough of that bullshit for now. Let's have a look at that launch trailer for Battlefield Hardline.

I'm still sold on Battlefield Hardline. Playing in the beta for the game showed me how much fun the multiplayer action will be and how great it will look on the PS4. All of the above action here just adds to what we've already been shown for Battlefield Hardline's story mode and that sells it even more for me. Unless they really changed a lot between the beta and launch we should all know how fun the gameplay will be even if you think it isn't being displayed at the best quality for your own tastes. Most of you will not even notice I am sure.