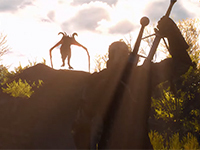 Another year and another PAX East in the bag that was filled with all kinds of new videos like the following one for The Witcher 3: Wild Hunt. The people over at CD Projekt Red sure do love to show off all they have for this game so far and they have treated us all to another seven or so minutes of gameplay for the game. Just the kind of thing we've all been waiting for as we have to wait so much longer to actually start to dig into the 100+ hours of gameplay that The Witcher 3 is being claimed to have. Unlike other titles out there, even though we've had hours of gameplay shown over the last years of time this doesn't feel like we have seen all of The Witcher 3: Wild Hunt before the launch.

Okay, I jest a bit here but it also doesn't feel like we've seen all of The Witcher 3 with the hours already shown because we really are not being shown much more of anything here that we haven't seen already. Outside of the location and bits of mountain environment, everything is pretty much what we've seen in the past already for The Witcher 3. Even the narrative by the developer sounds like it could have been lifted from one of the past videos describing some of the mutations that will aid us in our quests when playing the game. If you didn't know by now there is a Witcher-Sense that lets you track monsters that have been by recently…

None the less it is technically new footage for The Witcher 3: Wild Hunt so I guess I'll let you have at it if you were not lucky enough to be at PAX East and check it out there on the spot.

I wasn't lying to much there now was I? Nothing all too new in the way of gameplay for The Witcher 3 but mainly a new monster of sorts and a different location than we've seen in the past. Given this I feel like we still have about 98 hours of unseen gameplay if the estimations from CD Projekt Red are correct. I am hoping that is the case and not some kind of overselling of the game but we won't know until May 19th now will we? What do you think though? Do you like what you've seen so far for The Witcher 3: Wild Hunt or do you need more to be spoiled before making the choice to buy? Let us know down in the comments.