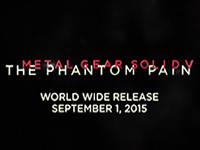 Finally we have a release date for Metal Gear Solid V: The Phantom Pain and if you haven't seen it in the image above, it will be hitting the PS3, PS4, Xbox 360, Xbox One, and PC all on the same date around the world. That date being September 1st. At least this is all according to a "leaked" video from IGN for their upcoming "exclusive look" at Metal Gear Solid V: The Phantom Pain. I guess it wasn't too exclusive as it was quickly found pre-loaded on their site by one of the users on NeoGAF and thus spread to the world. I don't know how some of these people do this stuff.

To add a bit of proof to all of this and hopefully show this is not a hoax, you can see the new Metal Gear Solid V video that should air on IGN tomorrow just below. It comes courtesy of UOL Jogos' website so do note that the video has some subtitles and questions not in English, if you don't speak the other language, but everything is narrated and answered in English so you can see and hear all of the new Metal Gear Solid V information. Here, have a look.

So there we have it. Metal Gear Solid V: The Phantom Pain on September 1st. Granted this is all based on Kojima Productions not having any delays or issues. Seeing as Hideo Kojima is slating this to be the final Metal Gear title in franchise you would think that they are going to take extra special care to make it the Magnum Opus that it should be. We've all waited long enough for the game so it should be just what we all hop and want it to be. Granted the team is moving on to other bigger and greater things but you still want to end on a high note all the time.

I am a bit curious as to how Konami is going to handle this little Metal Gear Solid V leak in terms of positive PR. Hopefully they will see that handing out "exclusives" to sites like the above mentioned are not always the best thing. Embargoes are hard to enforce when you can't really sanction the one location you can pay to have all of your news listed. I guess it really just works out for all of us gamers as now we don't need to be teased with the Metal Gear Solid V: The Phantom Pain release date anymore.