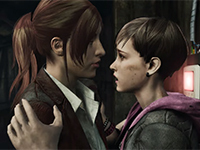 We knew there would be horror and a lot of crazy monsters to run from in Resident Evil Revelations 2 but it looks like there is going to be a bit more flare to the drama when it comes to the story. Where does this come from? Well from the recent "drama trailer" for Resident Evil Revelations 2 that has been given out to the world by Capcom as we lead into the release of the first episode. That would be next Tuesday for those who may be wondering how time has flown so fast by. You still have a few more days to pre-order and take advantage of that cross-buy thing if you want so you better step to it if you can.

Having all of that said, let us move on and see what kind of drama we can expect to see in Resident Evil Revelations 2. Come on big money and no whammies…

So it looks like Resident Evil Revelations 2 is going to have the general Resident Evil kind of drama and not something new and crazy given the episodic adventure we are going to be getting. At least this is all based on the trailer here that is more of a launch trailer than anything. I feel kind of gypped here. Given the platform I was expecting the brilliance of day time drama that has all those home bodies glued to their screens. Okay, maybe that is a stretch but I was expecting to see maybe something more or thrilling than the same "there are monsters and we need to live" kind of thing.

I am a bit glad to see the hint at maybe Wesker showing back up in the Resident Evil story here in Resident Evil Revelations 2. At least if there is more than just some broken photograph reference to him in the overall story here. He was always my favorite character in the franchise and I'd love to see him back. I know that there are reasons he may not be but I can still hope and dream. The Resident Evil franchise is always full of so much hope and wonder that he could make it back somehow. DON'T CRUSH MY DREAMS!

None the less Resident Evil Revelations 2 is coming out next week with the first episode. I for one do hope that it is hit out of the park and it is a good reason as to why we don't have a Resident Evil 7 anywhere in sight. What do you think? Let us all know down in the comments.