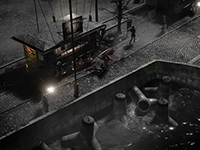 Hate it or not, Hatred is getting released as an AO title for PC and there seems to be no stopping it. I see this as a good thing but the whole "Hatred debate" bullshit has been done to death and I wish the main character could show up and perform a finishing move on it. We all hopefully get it by now. Games want Hatred to be made. Most media types want to save face by saying Hatred is an abomination to video games while some actually pine for the game to release. Hopefully if you are in here reading then you are one of those gamers who want to know more about Hatred and not try and see why you should have hatred for a game that is no more violent than any FPS title gobbled up by all already. Zombies are like humans who have a huge mental disorder after all…

So Hatred still doesn't have a release date but the window is still Q2 2015 for the PC. Those who really want to get on the Hatred bandwagon here can now pre-order the game from Destructive Creations via two different packages. Here's the different ways you can let your hatred shine:

There you go. You can now get all set to own Hatred and have a shirt to show it off. Although it does make me a little sad that they don't cater shirt sizes to us people who like to have baggy shirts but I have no real hatred for that. Especially when it is all followed up by some new gameplay video as well as some new screenshots for the game. Of course all of that can be seen below. You can also let us know what you really think about Hatred in the comments. As of right now it feels like I am the only one who is cool to say they are excited for Hatred to come to market. Prove me wrong?