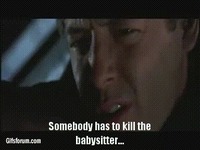 Ok, this has been a blaring issue that I see gets swept aside constantly in today’s society. The Babysitter effect. If you have no clue what I am talking about, then you need to pick up a copy of The Cable Guy or watch it next time it is on TV. This factor is something that is running more and more rampant since the TV became a staple in every home in the, well the civilized world.

Let me explain to help those who have not aught up yet. This effect it the idea that more and more parents have that they can leave children in front of the TV and have them stay occupied there. Meanwhile the adult can go and take care of adult stuff while the TV “Babysat” the kid. Hopefully that makes sense to you all. It does in my twisted head. But I digest (Can’t get tired of that one. Blue Harvest FTW!).

The effect has moved on into the new technologies of the world. The idea that technology is supposed to make life easier and simpler is the main one when it comes to technology. So why not see, say, Video Games as the next best “Babysitter” in today’s age? They are interactive. They can teach. They keep the kids occupied while you do your stuff. Sounds all good, except that it is just giving yet another excuse to people on why their children don’t grow up to be cowboys, or their equivalent of the age.

Would it take that much time out of your life to go over and spend time with your kids? Why not play the games with them? Hell why not just do anything with them any more? This is the new “Babysitter.” It’s just not viewed that way, exactly.

I’m not saying force your children to give up games at all, but don’t use it as a reusable cheapish “Babysitter” when you are still in the Gods Damned house with them. That is why there are phases out there like I am the Bastard son of Luigi Mario. Ok, maybe not that phase exactly, but it’s like that some what. The everything I know I learned from video games posters and phases can’t be too far off.

Please people, if you have kids, spend time with them. Doesn’t matter what you do with them, as long as it is legal, but don’t just neglect them so they only have the “Babysitter” in their life.

Sorry for the rant, but it has been on my mind lately. Hope you enjoyed or hated it. As long as it sparked something in your head, I’ll be happy.