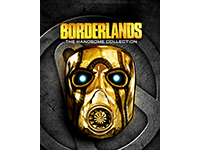 We apparently wanted it so 2K is bringing the Borderlands: The Handsome Collection to give all of those PS4 and Xbox One players a chance to enjoy the franchise on their new shiny consoles. They've only been out for over a year now so we need more of the old shit rehashed to pay for the future of the development studio and publisher for the Borderlands franchise. Also to allow for a "new generation" of gamers to experience the titles that came out during their generation but that is neither here nor there. The news here is that we are getting the Borderlands: The Handsome Collection on March 24th in North America and March 27th internationally. Hooray!

So what is coming in the new Borderlands: The Handsome Collection? Well we are getting both Borderlands 2 and Borderlands: The Pre-Sequel for starters. All for the nice low price of $59.99 USD. I guess if you have yet to play the titles it is a deal as it is a two for one. If you've owned them before you can carry over your save files, have four-player couch co-op, and re-play both games in "stunning HD" because that makes a difference given the style of Borderlands. The real bonus here, for those who haven't already purchased all of the DLC, is that you get all of the DLC for both titles. Here's a list:

If you are new to the franchise I guess The Handsome Collection is the way to go. But wait there's more… At least in the way to get all of you out there who already own everything listed above. You know what you don't own and only 5000 of you can own? I'm talking the Borderlands: The Handsome Collection — Claptrap-In-A-Box Edition. Yea, Gearbox and 2K just keep adding words as you add money to their wallets. At least in this case for the not-so-low price of $400 USD you can get this edition which houses: I will say that the Claptrap-In-A-Box Edition is kind of cool. Not $400 cool but I can see die-hard Borderlands fans dropping the cash or those ever elusive gamers with so much disposable income that they can justify the novelty of it all. It would give you something to talk about before you and your three other couch surfing, gaming friends load up any of The Handsome Collection content. Or at least something fun to play with until you crash it the first time and it is forever destroyed. That is not the point here I guess. The point here is that we need to line the pockets of Gearbox and 2K with another adjective ridden rehash of a title as we wait for the, also every elusive, third installment of the Borderlands franchise. It has to be coming as they will definitely have the funding now.