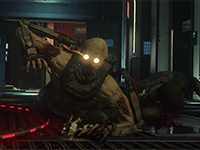 Only a little more time before that Havoc DLC for Call Of Duty: Advanced Warfare hits and we have a bunch of new maps, weapons, and game mode to play. Whatever we can do to keep us playing Advanced Warfare until this year's version of the CoD franchise is announced. Not to mention that all of us out there who dropped extra cash for the season pass would like to see something for our money outside of a few teases. At least I know I am in that boat and hopefully you are too.

This is where the new trailer for the Havoc DLC for Advanced Warfare kicks in. We get a good look at the maps and how they will add a new feel to the overall multiplayer experience. This includes a nice little merry-go-round and clown motel themed level. I've actually been through the clown place that I am sure Sledgehammer used for inspiration in the multiplayer although I don't remember the clown sign spitting out bombs. Advanced bombs that we get to use to blow each other up with. Now that is a way to make clowns creepy and fun all in the same swath.

The Havoc DLC is also where we will officially be getting the Exo Zombies mode for AW. There is still not all that much discussed in the below trailer for Exo Zombies but we do get to see all of those new characters and a bit on how they will function in the new mode. Not too shabby and a bit more shambling… Yes, zombie humor for the new zombie mode in the Havoc DLC. Sue me…but please don't…

All that the Havoc DLC has to offer will be available for those Xbox gamers out there on January 27th. Everyone else will need to wait a bit more time to get the Havoc DLC goodness but with so many other titles out there I think a little time could be used. Maybe or maybe not. None the less it is going to happen. Check after the video here for all of the details on the new maps if the video doesn't cover it enough for you.