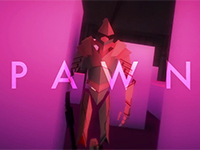 Volume was teased and received its first gameplay trailer mid-last year. This is the latest title coming from the studio that brought us Thomas Was Alone and is a modern day-ish stealth telling of a Robin Hood story. Except that unlike other stealth games Volume wants you to be heard during the gameplay. Heard so that the enemies can come and hunt you down and most likely to make it easier to sneak by them all. Enemies like all of the ones shown off in the following trailer for Volume.

Nothing to out there in Volume but it looks like they will all play up to the core gameplay that we've heard and seen thus far for the game. It's nice, simple, and hopefully very engaging. The names may need a bit of tweaking though as they kind of cross over between Chess names and your average enemies in a stealth game. Although Knight is kind of one of those trans-game-names so we'll let Volume keep that for now although as it is slated to release later this year I have a feeling these are a bit more set in stone.

Are you excited to see how addictive Volume can be given the developer's past? I know I am. Sound off like you have a pair and be heard in the comments below.