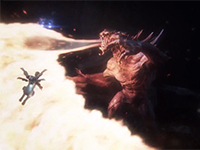 In only a few more days we will all be helping Turtle Rock and 2K test out those servers for Evolve. Hopefully you were in on the Big Alpha so you had a nice easy time getting set up for the next beta for the Xbox One or the server stress test for the PS4 and PC. If not good luck and keep an eye out for a whole bunch of new gameplay to be hitting after the beta is over as we are now moving closer to the launch of Evolve. With that close at hand we not only do we get those aforementioned beta/stress tests but a nice new video for those who are not going to be able to take part in the fun.

Normally I wouldn't be so keen on just another cinematic trailer for any game, Evolve included. That is usually because like most of you I'd rather see the game in action and not some hyped up piece of fluff to help with game sales. In the case of Evolve though I am going to give it a pass because I don't know if I could throw a fish at the gaming community and hit someone who hasn't seen live footage of the game. Every time there has been a new hunter or monster we've been given some gameplay to show off how they handle and not left to just assume. The way it should always be.

That all said, enjoy your new fluff media hype for Evolve while we wait for those servers to be turned on for the testing. It is a nice look at the Goliath and a few of the hunters but we all know this is never going to be how a match plays out. We all want to roll in like the Fellowship of the Ring but we always turn into a Monty Python sketch when all is said and done. Although I'd pay money to see a real match in Evolve play out like you are about to see.