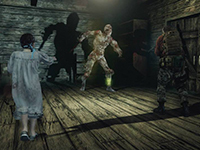 You've waited and now we have a bit more on all of those weird creatures we will be killing in Resident Evil Revelations 2's first episode in about a month's time. Okay, well maybe you weren't asking for it but that doesn't change the fact that we have some new details from Capcom to help cover those with the curious minds like Moira and Claire will obviously be having. What less could we be hoping for when it comes to Resident Evil Revelations 2 right? Weird looking things that are zombie-like but not enough to be called zombies. We need more not-zombies on the PS4 and Xbox One right?

None the less we have we have a quick description and look at those creatures that will plague Resident Evil Revelations 2 like the T-Virus has for all of us over the years. Have a look.

A wild boar type creature will be stalking us in Resident Evil Revelations 2 now? I guess that is a bit more creative than the "Sploder" and "Frankenstein" creatures that look similar to other titles out there or other creatures in the Resident Evil franchise history. Although I guess the Othrus is kind of like the dogs and lickers from before just with less of an explanation, for now, and a different wild animal type. Those wacky Umbrella scientists…what will the fuck with next? Wolverines. They totally need to mess with wolverines to send after us and not that of the Marvel Zombies variety.

While none of these enemies for Resident Evil Revelations 2 seem to be all too frightening that is also based off just still shots and not how they are used in the game. Hopefully they insight more fear than just these images have. Maybe they are only the start as the rest of the Resident Evil Revelations 2 episodes flow out over the month from its launch. February 17th is not that far away now.